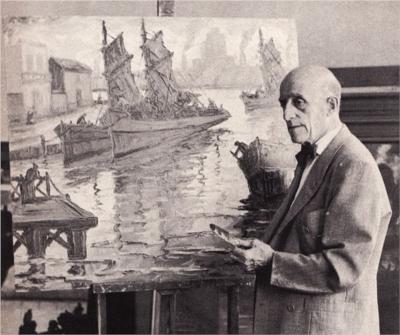 His birthday could not be determined precisely as he was abandoned on March 20, 1890 at an orphanage with a note that stated "This kid has been baptized, and his name is Benito Juan Martín". From his physical appearance, the nuns who found him deduced that he should be around twenty days old; thus March 1 is regarded as his birthday.

Adopted by Manuel and Justina Molina de Chinchella when he was seven years old, he adopted his stepfather's surname (which would later be hispanized as Quinquela).

At the age of 14 he attended a modest night school of art in La Boca while working during day on the family's coal-yard. When he turned 17 years old he joined the Pezzini Stiatessi Conservatory, where he stayed until 1912.

By 1910 he had started appearing in small art exhibitions, mainly in and around La Boca. He obtained the second prize on the Salón Nacional (Spanish, "National Exhibition") in 1920. After an exhibition at Mar del Plata in the same year, he was sent as the Argentine representative to an exhibition in Rio de Janeiro, Brazil attended by local personalities including Brazilian president Epitacio Pessoa.

By the 1920s Marcelo T. de Alvear and his wife were very fond of Quinquela Martín's works, and this admiration led to a lasting friendship. In 1922, Quinquela Martín was assigned as chancellor of the Argentine Madrid Consulate in Spain. On April, 1923 he exhibited at the Círculo de Bellas Artes of Madrid. Two of his works were acquired by the institution (Buque en reparación and Efecto de Sol), while another two were acquired by the Museum of Modern Art of Madrid.

In 1925 he set sail for France because—in his own words—"My trip to France is owed to President Alvear, who liked my work and wanted them to be judged by Paris". The Musée du Luxembourg acquired Tormenta en el astillero.

On 1927 he left for New York City, where he put part of his work on display at the Anderson Galleries. Accounts say two paintings were bought by "Mr. Havemeyer", who donated them to the Metropolitan Museum of New York. After this exhibition he made several others under sculptor Georgette Blandi's tutelage. Before returning to Buenos Aires, he was invited to Havana by Conde Ribero to exhibit there.

On 1929, on a trip to Italy, he had an exhibition at the Palazzo delle Esposizioni in Rome. The Museum of Modern Art of Rome acquired several paintings which were chosen by Benito Mussolini during the display. Quinquela Martín made his last trip in 1930, to London, where he exhibited at the Burlington Gallery. Several British museums acquired his paintings, including the Museum of Arts of London, Museum of Birmingham, Sheffield, Swansea, Cardiff, New Zealand and St. James's Palace.