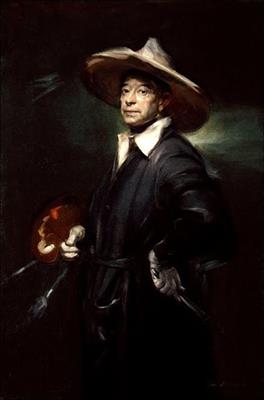 Self Portrait with Palette and Large Sombrero (1978) - Frank Mason


Frank Herbert Mason was born on February 20, 1921 in Cleveland, Ohio. His father was a Shakespearean actor and his mother was a violinist and a pianist. He attended the Music and Arts High School in New York City until he was awarded a scholarship to study at the Art Students League of New York with Frank DuMond.


In 1951, he began teaching at the Art Students League.


His painting, the Resurrection of Christ, can be seen in Old St. Patrick’s Cathedral in New York City. In 1962, he received a commission to paint eight large paintings of the Life of St. Anthony of Padua, which were permanently installed in the 11th Century Church of San Giovanni de Malta, in Venice, where his paintings hang alongside a painting by Giovanni Bellini. Consequently, the Order of Malta conferred upon him the Cross of Merit, Prima Classe. He became the first painter to receive the honor since Caravaggio.


In response to the overcleaning of the Sistine Chapel, Mason, along with James Beck, professor of art history at Columbia University, helped form the organization, ArtWatch International.


Mason served as President of the National Society of Mural Painters for the 1995-96 year.


He married Phyllis Harriman, the daughter of banker E. Roland Harriman and philanthropist Gladys Fries Harriman. Together, they had: