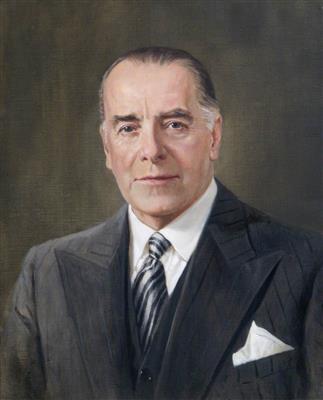 
Arthur Pan was born in Hungary and studied at the Budapest Academy of Art and in Paris at the Académie Julian. He came to England as a refugee from the Nazis.


He painted in England 1920 - 1960 as a portraitist working primarily in oil. He painted portraits of historical personages, including Sir Winston Churchill. On 25 December 1943, The Illustrated London News carried a double page spread of "Mr Churchill—A Characteristic Portrait of the Prime Minister from a Painting By Professor Arthur Pan".

A replica of a large Churchill portrait by Pan was bought for the White House. Pan also painted a "striking" portrait of South African Field Marshal Jan Smuts for Christ's College, Cambridge and Lord Catto,


On 7 April 1945, The Illustrated London News carried a full front page of a specially commissioned painting by Pan of Lieut. General Sir Miles Dempsey DSO MC, The Commander of the British Second Army and the first British Army commander to cross the River Rhine.


In its issue of 4 March 1959, The Motor magazine referred to Pan's portrait of the late Sir George Beharrell and mistakenly also described the artist as dead, for which it apologised in a subsequent issue.


Two portraits were commissioned by the artist's physician, Dr. Ernst Friedrich Blumberg. The paintings were of the physician's wife Marion Harding in 1962, which she has in her collection, and an earlier work of his father Dr. Jacob Moritz Blumberg, a surgeon and gynaecologist; the whereabouts of the latter is unknown.
They were painted at the residence of the artist in Chorley Wood, Hertfordshire, England.


During the 1950s Pan lived for two years at the Bagdhad Palace of King Faisal II of Iraq where he worked on a commission for the Iraqi Royal Family. The portraits were all destroyed in the coup d'état of July, 1958.


Pan made two copies of paintings by Willem van de Velde the Younger, The Shore at Sheveningen and Dutch Vessels Close Inshore at Low Tide, 13.5 x 18.5", both of which he signed. They came up for auction in the UK in 2001.


Pan had a son who became an architect.