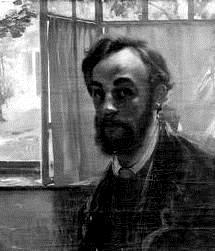 Baes was the son of Henri Baes, a lecturer at the Académie Royale des Beaux-Arts, and Héloïse Boly. He had two sisters, Alice and Irma. Baes was brought up in an artistically inclined family. He studied at the Académie Royale and was involved in an intellectual circle known as La Patte de Dindon, named after a cafe of the same name in the Grand Place, Brussels.