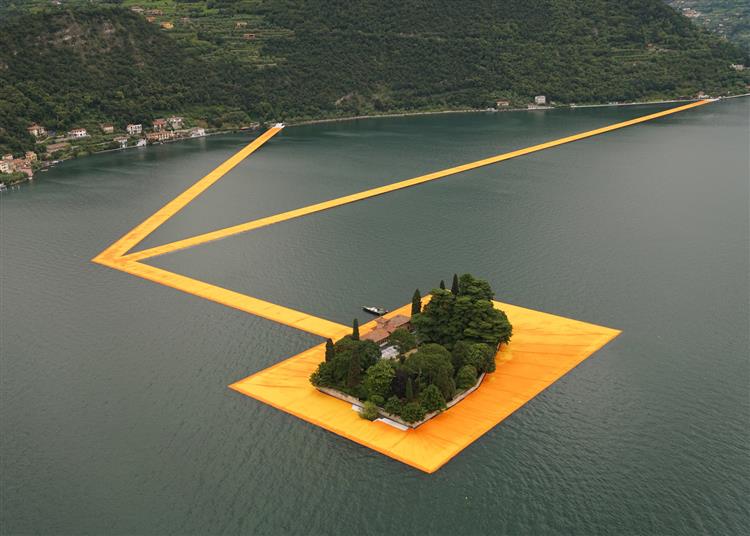 The Floating Piers was a temporary, site-specific work of art by Christo and Jeanne-Claude, consisting of 70,000 square meters of yellow fabric, carried by a modular floating dock system of 226,000 high-density polyethylene cubes installed in 2016 at Lake Iseo near Brescia, Italy. The fabric created a walkable surface between Sulzano, Monte Isola and the island of San Paolo.


Christo and Jeanne-Claude began conceptualizing of The Floating Piers in 1970. Their initial site was Rio de la Plata between Argentina and Uruguay. The couple also considered Tokyo Bay as a location before moving on to other projects.


In late 2013, Christo settled on Lake Iseo as the location for The Floating Piers and dedicated the next 22 months to realizing the project. It was the first major project he undertook after the death of his partner and collaborator Jeanne-Claude.


The project was estimated to cost $11 million, but was later reported at closer to $17 million. The funds were raised by Christo himself through sales of his project sketches and original art. Permits took less than a year.


The physical installation of the piers was handled by Deep Dive Systems, a company based in Bulgaria. They installed about 220 six-ton anchors in the lake floor at depths of up to 92 meters, over a period of three months. 226,000 cubes were then attached to those anchors, and covered by 70,000 sq. meters of nylon fabric. Over 600 workers were involved in the installation. Traffic planning required a 175-page document and cost €100,000 to produce.


On June 18, 2016, the saffron-colored walkway opened to the public. 270,000 people visited the free installation in its first five days. Due to the unexpectedly large crowds, organizers began closing the installation from midnight to 6 a.m. each day to allow for cleaning. On June 22, the large crowds caused some chaos at the main train station in nearby Brescia.