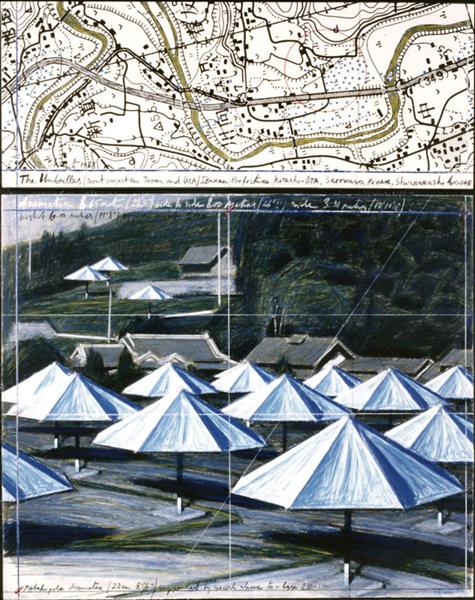 The Umbrellas. Joint Project for Japan and USA (Ibaraki and California)

Christo and Jeanne-Claude’s subsequent project carried a pinch of absurdist humor and represented the greatest logistical challenge they had yet faced. The plan was to create a pair of simultaneous landscape interventions in two geographically similar valleys—one in Southern California, the other in Japan’s Ibaraki Prefecture—involving thousands of giant umbrellas spaced out at equal distances over more than ten miles. Colored pale blue in Japan and rubber-duck yellow in the U.S., the umbrellas had a surreal quality previously absent in their work, which had until now exploited industrial materials rather than leisure objects like these. The idea of going out into the wild and hoarding over 3,000 jauntily colored pieces of oversized garden furniture is one that even René Magritte would have been proud of.

Though it is now rightfully seen as one of the great land art projects of the era, The Umbrellas became the site of a tragedy. Shortly before the international exhibition was due to close in October 1991, strong winds blew over one of the Californian umbrellas, killing one visitor and injuring several more. Christo immediately demanded the dismantling of both sites out of respect for the deceased.