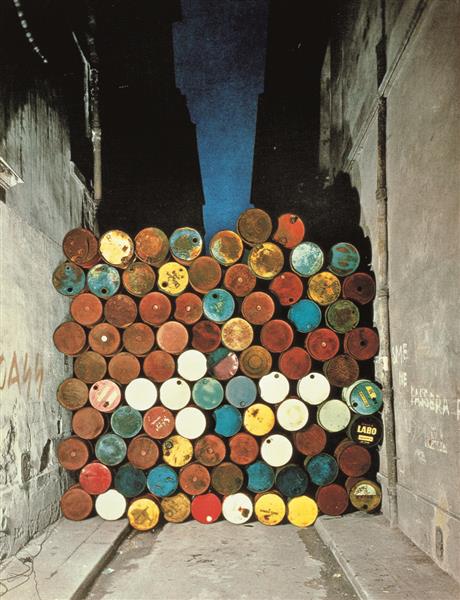 Christo Javacheff and Jeanne-Claude Denat met in 1958, when the former was commissioned to paint a portrait of the latter’s mother. The pair had been born on the same day in 1935—he in Bulgaria; she in Morocco, where her father served as an officer in the French army. Nevertheless, their union was an unlikely one; Jeanne-Claude came from a respectable family and was already engaged to be married. Christo, on the other hand, was a stateless art school dropout who had fled his native country—then a repressive Soviet client state—by stowing away on a goods train. Yet within a year of their meeting, Jeanne-Claude was pregnant with their first child.

Together, they began to envisage conceptual projects using whatever materials they could afford. Oil barrels were a particular focus of their early work: On the one hand, they were cheap and easy to stack to formally imposing effect; on the other, their normal function alluded to the West’s dependency on oil, opening up a frame of reference that encompassed politics, economics, and environmental matters. On the night of June 27, 1962, Jeanne-Claude and Christo began assembling their first major outdoor project: an obstacle on a narrow street in Paris’s Latin Quarter created from 89 oil drums turned onto their sides. It stretched from one end of the street to the other, completely blocking the thoroughfare to pedestrian and vehicle traffic for the eight hours it stood in place.

It caused a commotion, and the artists—who had failed to get permission from the police prefect—almost got themselves arrested. Yet for all that it angered local motorists and outraged officials, TheIron Curtain captured Paris’s imagination. Unsurprisingly, given its title and Christo’s dramatic past, some read it as a comment on the Berlin Wall, which had risen overnight in the East German capital less than a year before. The work stood as a powerful political statement—one that also presaged the barricades that would be constructed by rioting students in the area six years later.