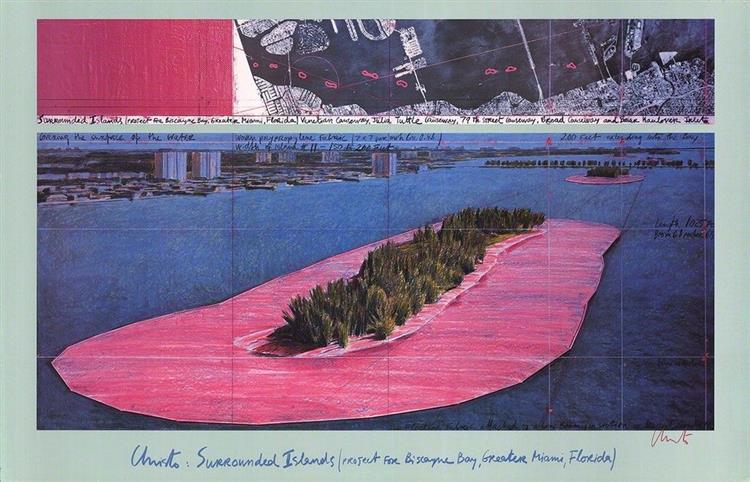 In 1964, Christo and Jeanne-Claude moved to New York, eventually acquiring American citizenship. From their new base, they developed their own commercial enterprise: In order to maintain artistic independence, they sold preparatory drawings and models to finance larger projects. (Christo still self-funds everything he does this way, accepting no subsidies or official partnerships.)

This new model of working allowed the artists to take on their first truly monumental projects. In 1980, they embarked on their most visible adventure yet: a proposal to surround 11 uninhabited islands in Biscayne Bay, Florida, with pink plastic “skirts” woven to fit the contours of the land. As with all of their work of this period, the project was credited to Christo alone, but he freely admits that the driving force behind the concept and its execution was Jeanne-Claude. Though this seems odd (if not indefensible), there was a rationale to it: both believed that people would be confused by the idea of two artists working together as a single force, and in the male-dominated art world of the time, it seemed a better bet to credit Christo as the author of the work. It was only in 1994 that the billing was changed to represent Jeanne-Claude’s contributions.

After nearly three years of negotiating with both public and private bodies, the Surrounded Islands finally came into being in 1983. It involved some 6.5 million square feet of polypropylene fabric, and could be seen from miles down the coast. Though it was in place for just two weeks, the project attracted thousands of visitors and proved to be a landmark in Florida’s cultural history.