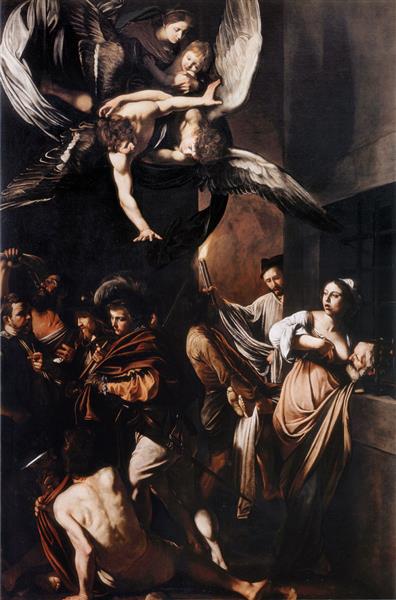 The Seven Works of Mercy

The Seven Works of Mercy (Italian: Sette opere di Misericordia), also known as The Seven Acts of Mercy, is an oil painting by Italian painter Caravaggio, circa 1607. The painting depicts the seven corporal works of mercy in traditional Catholic belief, which are a set of compassionate acts concerning the material needs of others.

The painting was made for, and is still housed in, the church of Pio Monte della Misericordia in Naples. Originally, it was meant to be seven separate panels around the church; however, Caravaggio combined all seven works of mercy in one composition which became the church's altarpiece. The painting is better seen from il "coreto" (little choir) in the first floor.

The titular seven works/acts of mercy are represented in the painting as follows:

American art historian John Spike notes that the angel at the center of Caravaggio’s altarpiece transmits the grace that inspires humanity to be merciful.

Spike also notes that the choice of Samson as an emblem of Giving Drink to the Thirsty is so peculiar as to demand some explanation. The fearsome scourge of the Philistines was a deeply flawed man who accomplished his heroic tasks through the grace of God. When Samson was in danger of dying of thirst, God gave him water to drink from the jawbone of an ass. It is difficult to square this miracle with an allegory of the Seven Acts of Mercy since it was not in fact the work of human charity.

Regarding the sharp contrasts of the painting’s chiaroscuro, the German art historian Ralf van Bühren explains the bright light as a metaphor for mercy, which "helps the audience to explore mercy in their own lives".. Current scholarship has also established the connection between the iconography of "The Seven Works of Mercy" and the cultural, scientific and philosophical circles of the painting's commissioners..