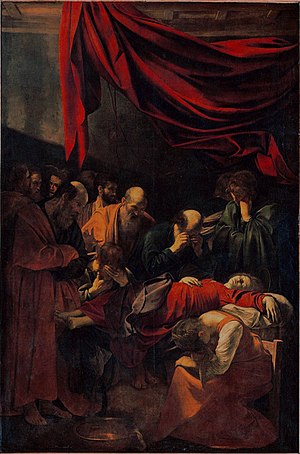 The Death of the Virgin

Death of the Virgin was commissioned by a wealthy papal lawyer for his chapel in Trastevere, Rome, in 1601. Upon completion, it was deemed unfit for the parish, who rejected the depiction of the dead body of Mary. Other reports say the painting was unfit for the parish because of Mary’s bare legs. It was also a controversial piece because Caravaggio is said to have used a prostitute, one of his most common models, as the model for the Virgin Mary. Either way, it was later bought by the Duke of Mantua, after hearing from Peter Paul Rubens that it was one of Caravaggio’s best works

Death of the Virgin (1606) is a painting completed by the Italian Baroque master Caravaggio. It is a near contemporary with Caravaggio's Madonna with Saint Anne now at the Musée du Louvre.

When he painted The Death of the Virgin (c. 1601-6), Caravaggio had been working in Rome for fifteen years. The painting was commissioned by Laerzio Cherubini, a papal lawyer, for his chapel in the Carmelite church of Santa Maria della Scala in Trastevere, Rome, the painting could not have been finished before 1605-1606. The depiction of the Death of the Virgin caused a contemporary stir, and was rejected as unfit by the parish.

Giulio Mancini thought Caravaggio modelled a prostitute, possibly his mistress, as the Virgin. Giovanni Baglione and Gian Pietro Bellori attributed the rejection to the appearance of the Virgin. The breach of decorum led to a rejection of the painting by the fathers of Santa Maria della Scala and its replacement by a picture by Carlo Saraceni, a close follower of Caravaggio.

Upon the recommendation by Peter Paul Rubens, who praised it as one of Caravaggio's best works, the painting was bought by Vincenzo Gonzaga, Duke of Mantua. Giovanni Magni, the duke's ambassador, briefly exhibited the painting in his house on the Via del Corso, between 1 and 7 April 1607. Copying was absolutely forbidden.

The duke's collection was to be sold to Charles I of England in 1627. After his execution the English Commonwealth put his collection up for sale in 1649, and the painting was bought by Everhard Jabach, who in 1671 sold it to Louis XIV for the French Royal Collection, which after the French Revolution became the property of the state. Today it hangs in the Louvre. Prior to leaving Rome, it was shown at the Academy of Painters for under two weeks. However, by then, Caravaggio had fled Rome, never to publicly return. During one of his frequent brawls in Rome, the mercurial and impulsive Caravaggio killed a man, Ranuccio Tomassoni, during a sword fight after a tennis game.

The painting recalls Caravaggio's Entombment in the Vatican in scope, sobriety, and the photographic naturalism. The figures are nearly life-sized. Mary lies reclined, clad in a simple red dress. The lolling head, the hanging arm, the swollen, spread feet depict a raw and realistic view of the Virgin's mortal remains. Caravaggio completely abandons the iconography traditionally used to indicate the holiness of the Virgin. In this cast-off body, nothing of the respectful representation found in devotional paintings remains.

The composition is arranged around the Virgin, the painting's central theme. Surrounding the Virgin are overcome Mary Magdalen and apostles. Others shuffle in behind them. The compact mass of the assemblage and the posturing of the figures guide the viewer's eye toward the abandoned body. He expresses the greater grief of the former not by a more emotive face, but by hiding their faces. Caravaggio, master of stark and dark canvases, is not interested in a mannerist exercise that captures a range of emotions. In some ways this is a silent grief, this is no wake for wailers. The sobbing occurs in faceless emotional silence. The holiness of the Virgin is discerned by her thread-like halo. Suppressing all anecdotal detail, Caravaggio invests this subdued scene with extraordinary monumentality through the sole presence of these figures and the intensity of their emotions. The theatrical drape of blood-red cloth looms in the upper portion of the canvas; a common motif in deposition painting, here used to heighten the scene's dramatic effect.