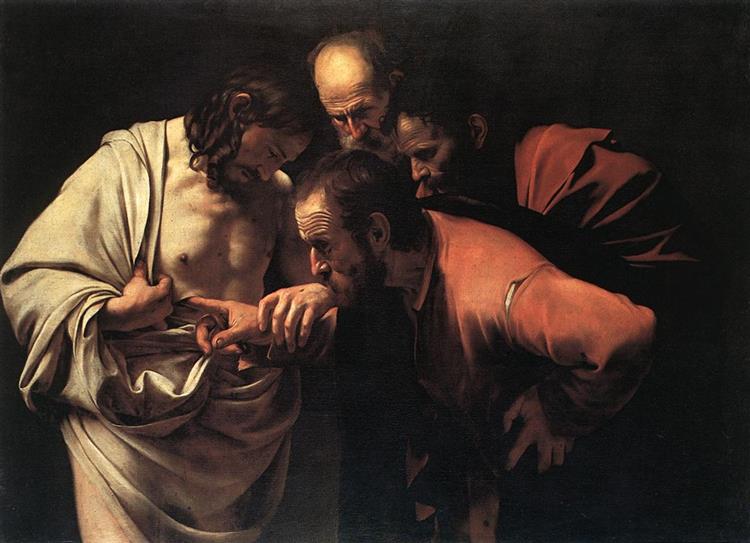 The Incredulity of Saint Thomas is a painting of the subject of the same name by the Italian Baroque master Caravaggio, c. 1601–1602. It is housed in the Sanssouci Picture Gallery, now a museum, in Potsdam, Germany.

It shows the episode that gave rise to the term "Doubting Thomas" which, formally known as the Incredulity of Thomas, had been frequently represented in Christian art since at least the 5th century, and used to make a variety of theological points. According to St John's Gospel, Thomas the Apostle missed one of Jesus's appearances to the Apostles after His resurrection, and said "Unless I see the nail marks in his hands and put my finger where the nails were, and put my hand into his side, I will not believe it." John 20:25 A week later Jesus appeared and told Thomas to touch Him and stop doubting. Then Jesus said, "Because you have seen me, you have believed; blessed are those who have not seen and yet have believed." John 20:29

In the painting, Thomas's face shows surprise as Jesus holds his hand and guides it into the wound. The absence of a halo emphasizes the corporeality of the risen Christ. The work is in chiaroscuro.

This picture is probably related to Saint Matthew and the Angel (1602) and the Sacrifice of Isaac (1603), all having a model in common. It belonged to Vincenzo Giustiniani before entering the Prussian royal collection, surviving the Second World War intact.

A second version of "The Incredulity of Saint Thomas" has been re-discovered in Trieste, Italy in a private collection. It is published in the Maurizio Marini corpus catalogico "Caravaggio - Pictor praestantissimus" Newton & Compton - 2005 in the position Q50. The painting is declared "d'interesse artistico e storico" by the "Ministero per i Beni e le Attività Culturali Sopraintendenza Regionale del Fiuli - Venezia Giulia". Its authenticity has been attested by several experts including Maurizio Marini, Maria Ranacher and Sir Denis Mahon and confirmed by a court in Trieste.