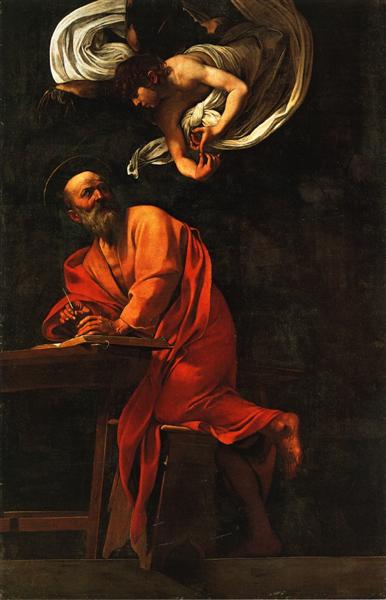 The Inspiration of Saint Matthew (1602) is a painting by the Italian Baroque master Caravaggio. Commissioned by the French Cardinal Matteo Contarelli, the canvas hangs in Contarelli chapel altar in the church of the French congregation San Luigi dei Francesi in Rome, Italy. It is one of three Caravaggio canvases in the chapel: hanging between the larger earlier canvases of The Martyrdom of Saint Matthew, and The Calling of Saint Matthew. This was not an easy commission for Caravaggio, and at least two of the three paintings had to be either replaced or repainted to satisfy his patron, the Cardinal Del Monte.

It is instructive to compare the two versions of the latter painting to see how provocative and controversial Caravaggio was in his time. Unfortunately, the first, rejected, version of this theme was destroyed in World War II, and we only have black and white and enhanced color reproductions. In the first version, Saint Matthew and the Angel, the angel stands close to Matthew the Evangelist personal space and engages in what appears more direct intervention than divine inspiration. The angel intertwines with the old man, apparently whispering inspiration into his ear. The rejected painting can be compared to the earlier Caravaggio canvas of the Rest on the Flight into Egypt.

In the work featured on the altar, the angel belongs to an aerial and sublime dimension, enveloped in an encircling rippled sheet. The restless Matthew leans to work, as the angel enumerates for him the work to come. All is darkness but for the two large figures. Matthew appears to have rushed to his desk, his stool teetering into our space. His expression is sober.

It is thought the contemporary styles of Caravaggio and Carracci were at odds with each other, and non overlapping. In this light it is instructive to compare and contrast a similar canvas, by Carracci's pupil, Giovanni Lanfranco presently in Piacenza as well as a painting on a similar theme by Rembrandt.