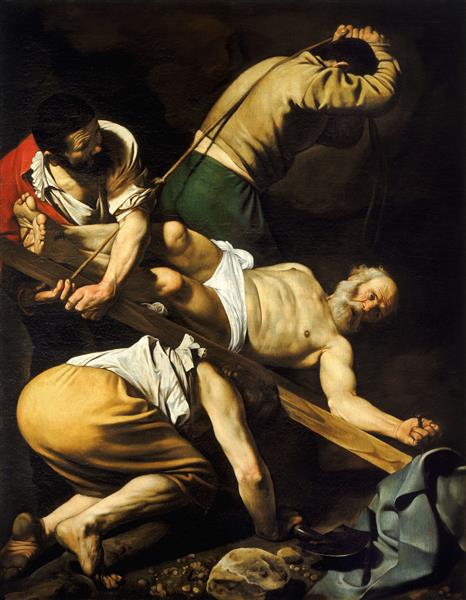 The Crucifixion of Saint Peter (Italian: Crocifissione di san Pietro; 1601) is a work by Michelangelo Merisi da Caravaggio, painted for the Cerasi Chapel of Santa Maria del Popolo in Rome. Across the chapel is a second Caravaggio work depicting the Conversion of Saint Paul on the Road to Damascus (1601). On the altar between the two is an Assumption of the Virgin Mary by Annibale Carracci.

The painting depicts the martyrdom of St. Peter by crucifixion—Peter asked that his cross be inverted so as not to imitate his God, Jesus Christ, hence he is depicted upside down. The large canvas shows Ancient Romans, their faces shielded, struggling to erect the cross of the elderly but muscular apostle. Peter is heavier than his aged body would suggest, and his lifting requires the efforts of three men, as if the crime they perpetrate already weighs on them.

The two Caravaggios, as well as the altarpiece by Carracci, were commissioned in September 1600 by Monsignor Tiberio Cerasi, who died shortly afterwards. Caravaggio's original versions of both paintings were rejected. They passed into the private collection of Cardinal Sannessio, and several modern scholars including John Gash, Helen Lagdon and Peter Robb, have speculated that Sennassio may have taken advantage of Cerasi's sudden death to seize some pictures by Rome's most famous new painter. The first Conversion of Paul has been identified with The Conversion of Saint Paul (1600) in the Odescalchi Balbi Collection, Rome, but the first version of the Crucifixion of Peter has disappeared; some scholars have identified it with a painting now in the Hermitage Museum in St. Petersburg, but this is not generally accepted (in the Hermitage catalog Martyrdom of St. Peter is attributed, with a question mark, to Lionello Spada and dated on the first quarter of the 17th century). In all events, the second versions, which seem to have been more unconventional than the first, were accepted without comment by the executors of Cerasi's estate in 1601.

The two saints, Peter and Paul, together represent the foundations of the Catholic Church, Peter the rock upon which Christ declared his Church to be built (Gospel of Matthew 16:18), and Paul who founded the seat of the church in Rome. Caravaggio's paintings were thus intended to symbolise Rome's (and Cerasi's) devotion to the Princes of the Apostles in this church which dominated the great piazza welcoming pilgrims as they entered the city from the north, representing the great Counter-Reformation themes of conversion and martyrdom and serving as propaganda against the twin threats of backsliding and Protestantism.