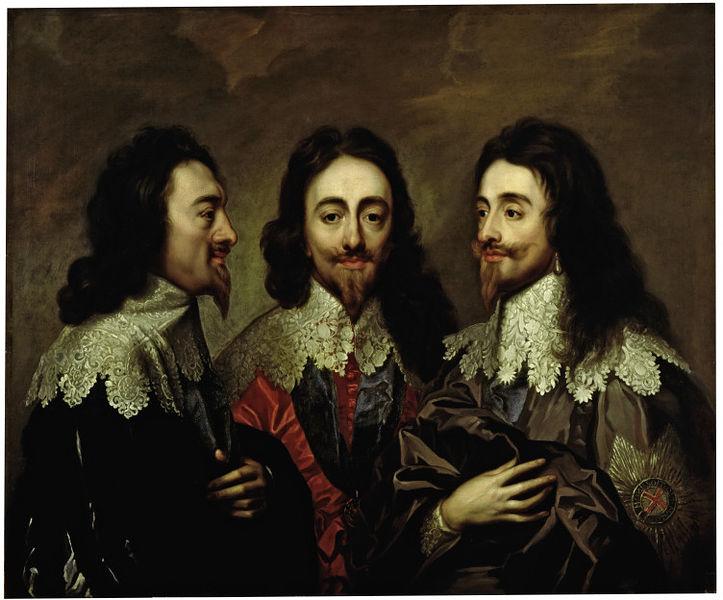 Charles I in Three Positions

This triple portrait had an unusual function as a kind of design for sculpture. In 1636 Charles I dispatched the original of this painting by Sir Anthony van Dyck to the sculptor Gian Lorenzo Bernini in Rome. It was to assist in the making of a marble bust. The three viewpoints were chosen to enable the sculptor to create a truly three-dimensional likeness.
The sculpture was intended as a papal present to Queen Henrietta Maria. After the bust was finished, the painting remained in the possession of Bernini and passed to his descendants. It was brought back to England in 1802 and entered the Royal Collection in 1822. The bust itself was a great success with the King and Queen. It was eventually destroyed in a fire at Whitehall Palace, London, in 1698.

Charles I in Three Positions, also known as the Triple portrait of Charles I, is an oil painting of Charles I of England by Flemish artist Sir Anthony van Dyck, showing the king from three viewpoints: left full profile, face on, and right three-quarter profile. Painted in 1635 or 1636, it is currently part of the Royal Collection. The colours of the costumes and pattern of the lace collars are different in each portrait, though the blue riband of the Order of the Garter is present in all three.

The painting was sent to Rome in 1636 to be used as a reference work for the Italian sculptor Gian Lorenzo Bernini to create a marble bust of Charles I. Pope Urban VIII sent the bust to Charles's queen Henrietta Maria in 1638 in the hope of encouraging a reconciliation of the Roman Catholic Church with the Church of England. The bust was presented in 1637 and admired for its workmanship and likeness to the King. Charles rewarded Bernini with a valuable diamond ring. Queen Henrietta Maria commissioned Bernini to make a companion bust of her, but the English Civil War intervened and it was never made. The bust of Charles was sold at the end of the English Civil War but recovered for the Royal Collection on the Restoration, only to be destroyed by a fire in Whitehall Palace in January 1698.

The painting remained in the possession of Bernini and his heirs in the Bernini Palace on the Via del Corso until c. 1802, when it was sold to British art dealer William Buchanan and returned to England. It was exhibited at the British Gallery in 1821 and acquired for the Royal Collection in 1822, and is usually displayed at Windsor Castle.

It is thought that the painting was influenced by Lorenzo Lotto's Triple Portrait of a Goldsmith, c. 1530, then in the Royal Collection. In its turn, Van Dyck's portrait of Charles I may have influenced Philippe de Champaigne's Triple portrait of Cardinal de Richelieu, c. 1642.

Many copies of the work were made, possibly by supporters of the royal House of Stuart, including one created around 1750 and now in the collection of the Victoria and Albert Museum in London.

The British Museum has an engraving which was believed to depict the bust before it was destroyed, with baroque locks of flowing hair, fine lace collar, garter sash, possibly by Robert van Voerst, but now believed to show a bust by François Dieussart.