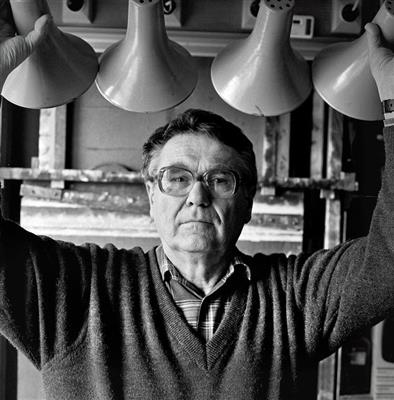 Zdzisław Beksiński (pronounced [ˈzd͡ʑiswaf bɛkˈɕiɲskʲi]; 24 February 1929 – 21 February 2005) was a Polish painter, photographer and sculptor, specializing in the field of dystopian surrealism. Beksiński did his paintings and drawings in what he called either a 'Baroque' or a 'Gothic' manner. His creations were made mainly in two periods. The first period of work is generally considered to contain expressionistic color, with a strong style of "utopian realism" and surreal architecture, like a doomsday scenario. The second period contained more abstract style, with the main features of formalism.

Beksiński was stabbed to death at his Warsaw apartment in February 2005 by a 19-year-old acquaintance from Wołomin, reportedly because he refused to lend the teenager money.

Zdzisław Beksiński was born in Sanok, southern Poland. He studied architecture in Kraków. In 1955, he completed his studies and returned to Sanok, working as a construction site supervisor, but found out he did not enjoy it. During this period, he had an interest in montage photography, sculpting and painting. When he first started his sculpting, he would often use his construction site materials for his medium. His early photography would be a precursor to his later paintings often depicting peculiar wrinkles, desolate landscapes and still-life faces on rough surfaces. His paintings often depict anxiety, such as torn doll faces, faces erased or obscured by bandages wrapped around the portrait. His main focus was on abstract painting, although it seems his works in the 1960s were inspired by Surrealism.

Beksiński had no formal training as an artist. He was a graduate of the Faculty of Architecture at the Kraków Polytechnic with M.Sc. received in 1952. His paintings were mainly created using oil paint on hardboard panels which he personally prepared, although he also experimented with acrylic paints. He abhorred silence, and always listened to classical music while painting. Although he loved classical music, Beksinski also appreciated rock music.

An exhibition in Warsaw in 1964 was his first major success, as all his paintings were sold.

Beksiński undertook painting with a passion, working intensely and whilst listening to classical music. He soon became the leading figure in contemporary Polish art. In the late 1960s, Beksiński entered what he himself called his "fantastic period", which lasted up to the mid-1980s. This is his best-known period, during which he created very disturbing images, showing a gloomy, surrealistic environment with very detailed scenes of death, decay, landscapes filled with skeletons, deformed figures and deserts. These paintings were quite detailed, painted with his trademark precision. At the time, Beksiński claimed, "I wish to paint in such a manner as if I were photographing dreams".

Despite the grim overtones, Beksiński claimed some of his works were misunderstood; in his opinion, they were rather optimistic or even humorous. For the most part Beksiński was adamant that even he did not know the meaning of his artworks and was uninterested in possible interpretations; in keeping with this, he refused to provide titles for any of his drawings or paintings. Before moving to Warsaw in 1977, he burned a selection of his works in his own backyard, without leaving any documentation on them. He later claimed that some of those works were "too personal", while others were unsatisfactory, and he didn't want people to see them.