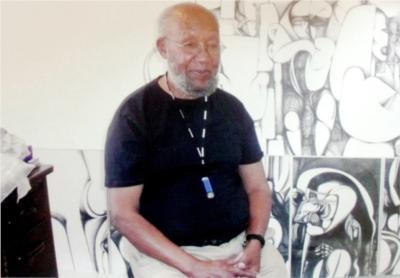 El-Salahi was born on 5 September 1930, in Omdurman, Sudan to a Muslim family and is arguably one of the most important modern African artists. His father's career was running a Qur'anic school, which transpires to be the place where El-Salahi learned and practiced his calligraphy, which is predominant throughout his artwork. As a result of his lack of interest, his marks in school prevented him from pursuing medicine, which fortunately led to him beginning his art career. He studied Art at the School of Design of the Gordon Memorial College, currently the University of Khartoum. On the basis of a scholarship, he subsequently went to the Slade School of Fine Art in London from 1954 to 1957. At the Slade School of Fine Art, El-Salahi was exposed to European schooling, modern circles, and various historical artists, which unintentionally altered the constructions of his artworks. . Studying here also allowed him to take formal and ideological cues from modernist painting, which helped him learn to balance pure expression and gestural freedom. Additionally, in 1962, he received a UNESCO scholarship to study in the United States, from where he visited South America. From 1964 to 1965 he returned to the US with the support of the Rockefeller Foundation, and in 1966 he led the Sudanese delegation during the first World Festival of Black Arts in Dakar, Senegal.

Due to the completion of his education and training, he returned to Sudan. During the duration of his stay, he used, in his work, calligraphy and elements of the Islamic culture that played a role in his everyday life. Trying to connect to his heritage, El-Salahi began to fill his work with symbols and marking of small Arabic inscriptions. As he became more advanced with incorporating Arabic calligraphy into his work, the symbols began to produce animals, humans, and plant forms, providing more meaning to his artwork and allowing viewers to connect to his work. El-Salahi learned to combine the European styles with the traditional Sudanese themes in his art, which evokes a transnational African-influenced surrealism.

El-Salahi was assistant cultural attaché at the Sudanese Embassy in London from 1969 until 1972, when he returned to Sudan as Director of Culture under Jaafar Nimeiri's regime, then was Undersecretary in the Ministry of Culture and Information until September 1975, when he was imprisoned without charge for six months for being accused of participating in an anti-government coup.

While in prison El-Salahi would use the 25 exercise minutes he received everyday to sketch out ideas for huge paintings. He would secretly sketch and bury the small drawing into the ground to maintain his ideas. Ten years after being released from prison he exiled himself from the country and for some years worked and lived in Doha, Qatar, before settling in Oxford, England.

He is considered a pioneer in Sudanese art and was a member of the "Khartoum School" that was founded by Osman Waqialla. In the 1960s he was associated with the Mbari Club in Ibadan, Nigeria.