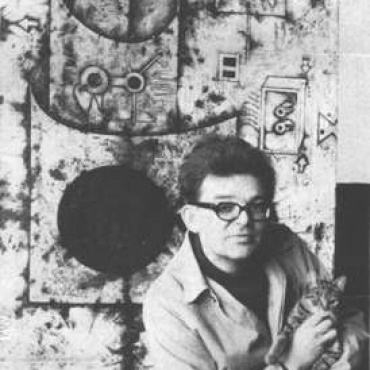 Mikuláš Medek (3 November 1926 in Prague – 23 August 1974 in Prague) was a Czech painter. He was a grandson of the impressionist painter Antonín Slavíček, son of the General of the Czechoslovak Army and Catholic writer Rudolf Medek and brother of the journalist Ivan Medek. He is considered one of the most important representatives of Czech modern painting and one of the most important exponents of the post-war period. He was the husband of the photographer Emila Medková.


During the Communist regime in Czechoslovakia, the general hostility towards modern art and free thinking clashed with his artistic independence and the spiritual dimensions of his works leading to a long lasting ban on displaying his works. The first full exhibition was realised only in 2002 in the Rudolphinum gallery in Prague. A selection of his works had been exhibited in a local gallery in Roudnice nad Labem in 1989 with no public notice. He died in Prague in August 1974.


Medek's work initially relies on the tradition of surrealism, later it brings new elements of the spiritual dimension. In 1952, he entered his "existential period" with the central theme of the human character in space, and at the turn of the 1950s and 1960s he came to abstract painting. As a result, so-called "prepared paintings" of color matter, arranged in the form of surface symbols and rationally distributed color formations have come into being. He brings the theme of the basic question of the meaning of human life directly to the color of its original image-making techniques (emails, etc.). In the last period of his life, he developed imaginative painting and also devoted himself to a book illustration.


His work, thanks to non-public exhibitions (so-called "Confrontation"), became a model for younger radical artists. After 1960, Medek was allowed to realize some public monumental works, which included the altarpiece of the church in Jedovnice (1963), made together with sculptor Jan Koblasa and the compositions for the interiors of the Czechoslovak office. airlines in Damascus, Košice (1963), Paris (1964), Prague (1969) and New York (1970).


The central theme of Medek's work is the theme of human destiny, which is combined with the emotive expression of the intensive experience of the mystical character in an inwardly unified and unusually impressive whole, which speaks to the spectator with extreme urgency. Symbolism of sign systems creates special visual metaphors of human existence in its tragic, painful and mysterious dimensions.