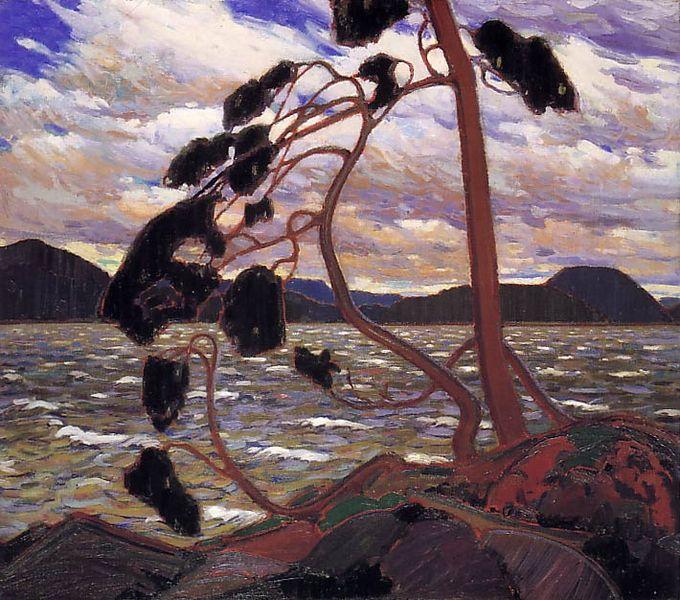 Painted in the winter of 1916–1917, this lone pine tree demonstrates that Thomson’s formation as an artist was both erratic and original. He takes the sinuous forms of Art Nouveau (a decorative style he had used as a commercial artist and in images such as Northern River, 1915), and the brash and vivid colors of the early Expressionists (especially in the ribbons of red in the foreground, outlining boulder-shaped areas), and uses them to create his composition. The image, based on a landscape he knew well, contains imaginary elements too.

Thomson places the pine tree alone on a point beside a lake. It stands in the middle of the canvas, lopped off at the top—a position that transforms a simple subject into one making a strong and provocative statement. The twisted trunk and branches show age and perseverance, and bravery against the elements. The painting may also reflect Thomson’s state of mind—a mental or metaphorical self-portrait. He may have felt empathy with the tree, for the way it had grown and survived. He painted this canvas while, in Europe, the First World War was raging—a cataclysmic event in which many of his friends were involved. Survival, threatening circumstances, and the possibility of great loss had become paramount issues for everyone around him.

The background of the painting is a complicated invention of the animated sky, scudding clouds, and wind-driven whitecaps, which together reinforce the painting’s (posthumous) title. Between sky and lake lie the thin wedge of shore and far hills, at once separating yet fusing air and water with pitch-dark vertical stitches of pigment in Prussian green and blue. What impresses viewers most about this painting is its power and energy. The surging sky and the constant movement on the lake’s surface limit the only stillness in the picture: the pine tree itself. Of the entire Canadian canon, this painting is closest in its intensity to the paintings of Vincent van Gogh.

The completed canvas is very different, both as an idea and in its detail, from the sketch Thomson made in the spring of 1916. Whereas most of Thomson’s small oil sketches were markedly fresher, stronger, and more intimate than the canvases derived from them, this painting surpasses the sketch with its dynamism. No other canvases by Thomson, with the exceptions of The Jack Pine 1917 (sketched and painted in the same time frame as The West Wind), and of Opulent October 1916 (painted the winter before from a sketch done in the summer of 1915), share this same superb quality.

More often, the canvases fail to attain the level of intensity and immediacy that an artist experiences when the moment of inspiration strikes and the subject is at hand. The working-up of several other canvases done at this time, 1916–1917, such as Woodland Waterfall 1916 (not a successful painting), The Fisherman 1917, and The Drive 1917, are all examples of paintings with the stagey quality and stiff awkwardness that led Dr. James MacCallum (a friend and patron of Thomson) to claim they were unfinished. They have neither the confidence nor the magisterial aplomb of The West Wind or The Jack Pine.

The West Wind is a painting by Canadian artist Tom Thomson. An iconic image, the pine at its centre has been described as growing "in the national ethos as our one and only tree in a country of trees". It was the artist's final painting, and according to some art historians was unfinished at the time of his sudden death by drowning in 1917.

Thomson based The West Wind on an earlier, slightly different sketch he produced in 1916 while working as a park ranger in Algonquin Park. In the finished canvas Thomson moved the pine further to the right, replaced a less defined foreground plane with strongly patterned rock shapes, and removed a dead tree limb from the ground. The location of the subject is uncertain; Thomson's friend Winifred Trainor believed the site represented was Cedar Lake, though Grand Lake, Algonquin Park has also been proposed as the setting. Some locals believe the location to be on Kawawaymog Lake.

As in his iconic The Jack Pine, Thomson began the painting with an undercoat of vermilion that he allowed to show through in various places to contrast with the greens, to lend the work a feeling of "vibration" and movement. The pine dominates the composition without obscuring the view into the distance, and is successful as both specific representation and abstract design.

Though not imposing in scale, it is a graceful arabesque decoration, "a magnified bonsai". Thomson's background in design lent his composition an art-nouveau sensibility, for example, "in the way a single tree stands silhouetted against water or the sky like a symbol of romantic solitude". An earlier reviewer noticed the same effect in it and The Jack Pine: "[these] two best-known canvases... are essentially Art Nouveau designs in the flat, the principal motif in each case being a tree drawn in great sinuous curves... Such pictures, are, however, saved from complete stylization by the use of uncompromisingly native subject-matter and of Canadian colours, the glowing colours of autumn."

According to Trainor, Thomson was not satisfied with the picture, fearing that the flat abstract shapes of the foreground rocks and trees were inconsistent with the atmospheric conception of the background. However, for Thomson's colleague Arthur Lismer, the trees in The West Wind were symbolic of the national character, models of resolve against the elements. Thomson biographer and curator Joan Murray, while initially disliking the painting, wrote that it "is a powerful canvas; resonating with its message of weather and wind, it expressed the divine as some of us imagine it in Canada. This is the sort of tree that would stand at the gates of heaven to open the doors of the kingdom."

The Canadian Club of Toronto donated The West Wind to the recently opened Art Gallery of Toronto (now the Art Gallery of Ontario). Librarian George Locke, a club member, announced the donation in a speech, praising Thomson's accomplishments: "Thomson needs no tablet to commemorate his achievements ... He has left us work that expresses our national life – the forces of the great natural surroundings of this young land."