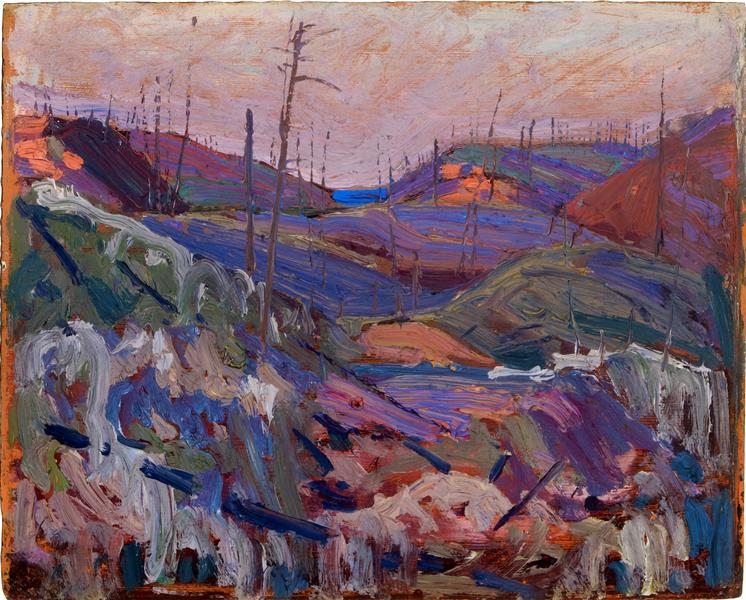 This agitated and chaotically messy elegy to what was once a mature forest powerfully illustrates an unexpected aspect of Thomson’s paintings in Algonquin Park: his reaction to the land after the fire has swept through and ravaged it. Along with about ten other sketches, including Burned Over Land (1916), Burnt Area with Ragged Rocks (1915), Burnt-Over Forest (1916), Burnt Land at Sunset (1915), and Burnt Country, Evening (1914), it refutes any idea that Thomson found only idyllic peace, beauty, and uplifting scenes to paint there.

As the painting spills out from the high, distant horizon point between two hills, the charred spindles of trees standing precariously like lifeless skeletons remind viewers constantly of fire and destruction. In the lower half, a tumble of paint crashes over rocks and more burnt trunks and branches like a wild cataract. Blood reds, blues, ash greys, and whites, all jumbled and mashed violently together, complete this statement of confusion and disorder.

A case can be made that at this time, Thomson’s preoccupation with the war manifested itself in a number of his paintings that depict the destruction and chaos caused by forest fires, flooding, and storms. He had tried to enlist for service but was rejected. Meanwhile, his friend A.Y. Jackson had volunteered in Europe, where he also painted the battlefield, as in A Copse, Evening (1918); and Lawren Harris and Fred Varley would follow. J.E.H. MacDonald was designing patriotic war posters and other materials, and Arthur Lismer, once he moved to Halifax, recorded the camouflaged convoy ships that transported fresh troops to the front lines in Europe.

As Thomson spoke and argued about the war with people he knew in Algonquin Park, some of whom were considered German sympathizers, this preoccupation with the conflict overseas turned his often-melancholy mind toward the portrayal of scenes of destruction, mayhem, and death. He seemed to sense in the destroyed parts of Algonquin what was happening in France and Belgium. Thomson might have been at the front himself, given the bristling hostility and cruelty he depicts in this scene. All told, sixty-six thousand young Canadian men died fighting in the war: nearly everyone in the country had lost a relative or friend or knew someone who had. Thomson was keenly sensitive to this feeling, and he painted it powerfully in this moving, elegiac work.