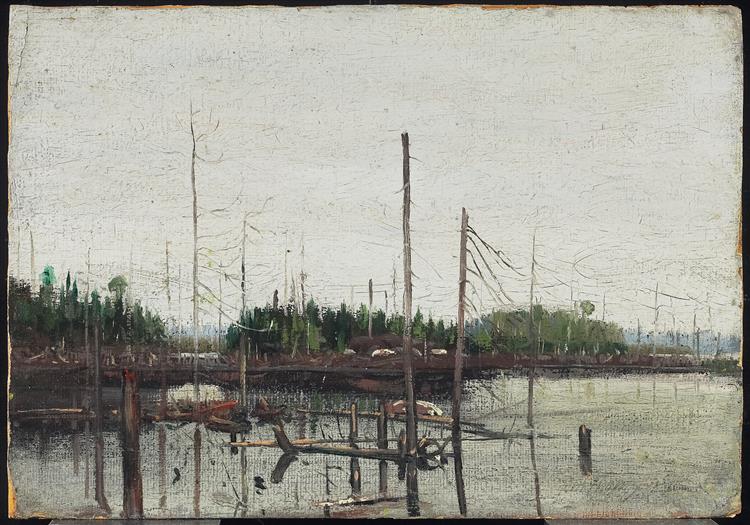 Drowned Land (1912) marks the beginning of the brief arc of Thomson’s years as a painter. Compared with other colorful works from 1912, such as Old Lumber Dam, Algonquin Park (1912), or The Canoe (1912), it is outstanding for its composition and precision and shows how Thomson was attracted by scenes or subjects usually ignored by other artists.

The drowned land, perhaps near Lake Scugog or Owen Sound, is the work of enterprising beavers or loggers who, by damming a creek, have drowned a section of meadow and forest at the edge of a lake. The recovering second growth is clearly visible in the background. The painting shows Thomson’s obsessive attention to detail—a constant in his work even as he pursued more complicated ideas and ways of painting his “northern” landscapes. The camera-like precision, the perfectly calibrated perspective, and the exact sense of scale are paramount. These characteristics stand out against a broad sky bereft of detail.

Thomson was blessed with exceptionally keen vision and penetrating insight. While painting, he saw things as though in a trance, with finely tuned microscope eyes and wide-angle vision. As he developed his enthusiasm and his skill, he was able to rely on this total concentration and keen perception to guide his hand and brush—whether he was painting super-realistically, as in Drowned Land, or loading paint onto a panel with broad strokes in a frenzy of insight and inspiration, as in Fire-Swept Hills (1915). In all of Thomson’s paintings, the accuracy of the subject and of his emotional reaction at the time is what gives his work both authority and power.

After years of working in commercial art (from 1902 to 1913), Thomson needed some proof of his innate talent and ability to make the shift to a fine art. This painting provides that assurance and heralds the change in his status in no uncertain terms.


Drowned Land is a 1912 oil sketch by the 20th-century Canadian painter Tom Thomson.


The work was painted in the fall of 1912, possibly on the Mississagi River. It depicts an area desolate and damaged due to flooding via damming. It was purchased by the Art Gallery of Ontario in Toronto in 1937 and has remained in the collection ever since. It was produced near the beginning of Thomson's short art career, just as he was beginning a transition from commercial art into full-time painting.


In 1912 after Thomson's initial experience of visiting Algonquin Park, he and his colleague William Broadhead went on a two-month expedition up the Spanish River and into Mississagi Forest Reserve (today Mississagi Provincial Park). Thomson's transition from commercial art towards his original style of painting began to be apparent around this time. Much of his artwork from this trip, mainly oil sketches and photographs, has been lost due to two canoe spills experienced during the trip, the first spill being on Green Lake in a rain squall and the second in a series of rapids.


Thomson's art director while at Grip Ltd., Albert Robson, identified Drowned Land as being painted on the Mississagi Forest Reserve canoe trip. Art historian David Silcox has suggested that it was perhaps painted on Lake Scugog or near Owen Sound. It was painted with oil on paper, which was further embossed with canvas texture, all mounted on plywood. A similar support was used for View Over a Lake: Shore with Houses.


The painting came right as Thomson was transitioning from commercial art into fine art and indicates his innate talent. It is similar to a sketch from the previous year, Near Owen Sound, in terms of colour, drawing and texture. On display is a "camera-like precision" and his incredible attention to detail in capturing scenes. Indeed, David Silcox has speculated that Drowned Land as well as other paintings may have been completed with a photograph as a memory aid given their "uncanny precision." The painting is especially notable for its skill of composition and precision, especially when compared with some of Thomson's other work from this period, such as The Canoe and Old Lumber Dam, Algonquin Park. These early sketches show how he had not yet established his own form of expression, being particularly dark and dreary compared to his later work. The subject of desolation was uncommon for the time, having not been seen in Canadian painting since the works of topographers in the early-nineteenth century.


The painting, like others from this period, depicts ideal fishing territory that Thomson likely would have enjoyed. Many of his paintings were overt in their depictions of the lumber industry, including dams, pointers, alligators and drives, the presence of industry being on his mind from early on. Drowned Land however is more subtle as it does not directly display any logging equipment. Instead, it presents the damage caused by logging operations and flooding due to damming. A hopeful recovering growth is apparent in the distance behind the skeleton of trees in the foreground.