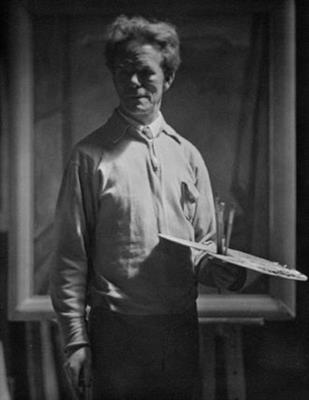 
Varley was born in Sheffield, England. in 1881. He studied art in Sheffield and attended Académie royale des Beaux-Arts in Antwerp, Belgium, where he worked on the docks. He immigrated to Canada in 1912 on the advice of another Sheffield native (and future Group of Seven member), Arthur Lismer, and found work at the Grip Ltd. design firm in Toronto, Ontario.


Beginning in January 1918, he served in the First World War with C.W. Simpson, J.W. Beatty and Maurice Cullen. Varley came to the attention of Lord Beaverbrook, who arranged for him to be commissioned as an official war artist. He accompanied Canadian troops in the Hundred Days offensive from Amiens, France to Mons, Belgium. His paintings of combat are based on his experiences at the front. Although he had been enthusiastic to travel to France as a war artist, he became deeply disturbed by what he saw:


Varley's Some Day the People Will Return, shown at Burlington House in London and at the Canadian War Memorials Exhibition, is a large canvas depicting a war-ravaged cemetery, suggestive that even the dead cannot escape the destruction.


After living in Ontario for a number of years, Varley moved to Vancouver, BC in 1926 where he became Head of the Department of Drawing and Painting at the School of Decorative and Applied Arts in Vancouver at the invitation of Charles Hepburn Scott. He remained in this position from 1926 until 1933. He left British Columbia in 1936 due to his experiences with depression, and two years later joined fellow artists on a trip to the Arctic in 1938. In 1954, along with a handful of artists including Eric Aldwinckle, he visited the Soviet Union on the first cultural exchange of the Cold War.


He died in Toronto in 1969 and was buried alongside other members of the Original Seven at the McMichael Canadian Art Collection grounds in Kleinburg, Ontario.


Varley was a member of the Royal Canadian Academy of Arts.


In Markham, Ontario, the Varley Art Gallery is named after him, as is Fred Varley Drive, a two-lane residential street in Unionville. Varley lived nearby at the Salem-Eckhardt House from 1952 to 1969.


On 6 May 1994 Canada Post issued 'Vera (detail), F.H. Varley, 1931' in the Masterpieces of Canadian art series. The stamp was designed by Pierre-Yves Pelletier based on an oil painting "Vera", (1931) by Frederick Horsman Varley in the National Gallery of Canada, Ottawa, Ontario. The 88¢ stamps are perforated 14 x 14.5 and were printed by Leigh-Mardon Pty Limited.


His secure place in the art history of Canada is verified by the government's decision to reproduce his self-portrait as a 17-cent postage stamp. On 22 May 1981 Canada Post issued 'Frederick H. Varley, Self Portrait' designed by Pierre Fontaine. The stamps are based on an oil painting "Self Portrait", (circa 1945) by Frederick Horsman Varley in the Hart House Permanent Collection, University of Toronto, Toronto, Ontario. The 17¢ stamps are perforated 12.5 and were printed by Ashton-Potter Limited.