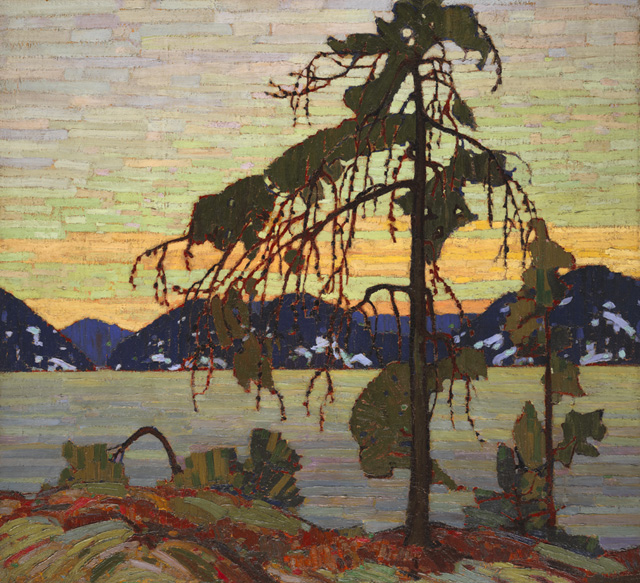 The Jack Pine is radically different from the oil sketch on which it is based and is perhaps the dominant contender as Thomson’s greatest work. Although Thomson retains the basic shape of the pine in his oil sketch, he makes the foreground considerably brighter in the canvas. The water surface, which in the oil sketch is hastily laid in with a muddy grey and then a yellowish-grey against the far shore, is transformed into long slabs of pigment in mauves, blues, and yellows, laying down long, unbroken battens of paint one above the other.

This dramatic change is especially evident in the sky. In the sketch, Thomson provides only a rapid swirl of nondescript character, deliberately leaving the wood surface exposed in several places—just as he does in the sketch for The West Wind (1917). In the canvas, however, and even more emphatically than for the lake surface, he dresses the sky in wide, horizontal ribbons of paint. With subtle modulations from the yellow-green sunset clouds at the horizon through to the bluish arc that appears at the top of the painting, Thomson creates a perfect backdrop to the pine and its immediate foreground.

The color of the wood of the small panels has changed since it was milled almost a hundred years ago. When it was new, it was much lighter, possibly even a bright yellowish-white tone if it was of birch. The slow oxidizing over the years has turned the wood into a rich, honey-colored element in the painting and given it a mellow patina.

What is surprising is the immense variety in the colors Thomson summons up for The Jack Pine, an array not seen in the sketch: sumptuous hues, complementing and contrasting light and dark, near and far, minute and grand. Even the softening of the distant shoreline, compared with the harder treatment in The West Wind, takes The Jack Pine into that vivid yet dusky and indeterminate hour of the day that clearly bewitched Thomson.

The Jack Pine is a well-known oil painting by Canadian artist Tom Thomson. A representation of the most broadly distributed pine species in Canada, it is considered an iconic image of the country's landscape, and is one of the country's most widely recognized and reproduced artworks.

The painting was completed in 1917, the year of Thomson's death. It is a roughly square canvas that measures 127.9 × 139.8 cm. It has been in the collection of the National Gallery of Canada in Ottawa since 1918.

Beginning in 1913, Thomson annually stayed in Algonquin Park from the spring until the autumn, often working as a guide while also fishing and painting for his own pleasure. In 1916, he also worked in the Park as a fire ranger. It was there, on Grand Lake with the hills near Carcajou Bay in the background, that Thomson made the oil sketch in 1916 that he would use for the final painting in 1917. There are numerous other paintings by Thomson with compositions similar to that of The Jack Pine: in fact, the majority of Thomson's canvasses depict the far side of a shore. These include Northern Lake (1912–13), his first; Pine Island, Georgian Bay (1914–16; pictured); and more famously, The West Wind (1917), another painting of iconic status.

The painting depicts a jack pine as a decorative and abstracted pattern, its shapes boldly simplified against the sunset. This stylization demonstrates Thomson's command of decorative effects, developed during his years as a graphic designer, and with the strong colour and value contrasts, creates the picture's symbolic resonance. The pine, its branches bowed and placed to the right of centre, extends nearly the full length of the canvas, and is cropped at the top. It rises from a rocky foreground; the hardy jack pine often takes root on shores hostile to other trees, its sparsely leaved branches forming eccentric shapes. It is silhouetted against water and sky, with the canvas bisected by the far shore.

The final canvas differs markedly from Thomson's spring 1916 sketch. He made the tree appear larger by lowering the hills on the far side of the lake. The weather had been stormy when Thomson made the sketch and the dark, rolling clouds were echoed in the heavy, swirling brushwork of the sky and the slate grey lake. In the final painting, Thomson has swapped the storm clouds for a clear twilight sky. The sky and lake are now highly stylized, painted in long horizontal brushstrokes that show, along with its nearly square format, the influence of Thomson's colleague Lawren Harris.

Thomson began with a vermilion red undertone, which he likely chose to avoid mixing the complementary colours red and green. The red was allowed to show through in parts of the tree, foreground landscape, and hills, making the colour "[seem] to vibrate".

Yet the focal point of the painting is not in the foreground, but at the distant shore—the patch of snow just below the centre of the canvas. Dennis Reid, who wrote a booklet on the painting for the National Gallery, points out an almost circular shape made by the foreground elements that encompass the focal point. The circle is formed from the large curving branches of the tree, the sloping left foreground, and the smaller tree at right. Reid writes that this near-circle "exists in space more like a ball, and as we peer through that ball to the opposite shore, for an instant we're inside our eye."