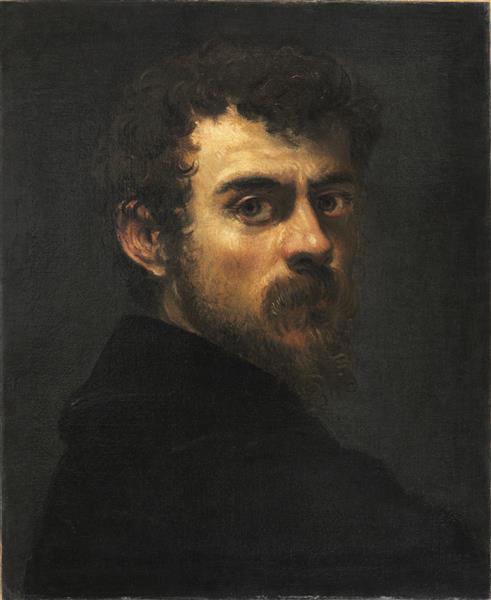 This dramatically intimate self-portrait announced the arrival of new talent on the Venetian art scene; Tintoretto painted it when he was 30 years old, at the beginning of his career. The picture follows the Venetian portraiture tradition of showing the subject's head emerging from a dark background and making the eyes the focus of attention.

The starkness of the composition, quite unlike his densely populated narrative paintings, was unprecedented, as the artist provides no details to indicate a place, context, or even his profession as an artist. While many artists depict themselves with the tools of their trade or wearing the finery of a gentleman, Tintoretto represents himself with an intense penetrating gaze, perhaps suggestive of peering into a mirror, and omits his hands, the very means by which the work was created. Tintoretto's gaze is truly captivating, with his head turned over his right shoulder he stares directly out, providing a confrontation with the viewer. The visibly pronounced brushstrokes, appearing as natural highlights on the artist's face from afar, seem as nearly impasto patches of paint on the surface of the composition as one approaches the work. This key feature of Tintoretto's style, found even in his earliest works, helped to set him apart from the more finished brushwork styles of his Venetian contemporaries such as Titian and Veronese, and would influence the work of his younger contemporaries and subsequent generations of artists.

This may be the first autonomous self-portrait in European art to leave the touch of the artist so evident, functioning almost as a signature. The line that extends to the freely painted self-portraits of Rembrandt, Vincent van Gogh, and Paul Cézanne starts here.