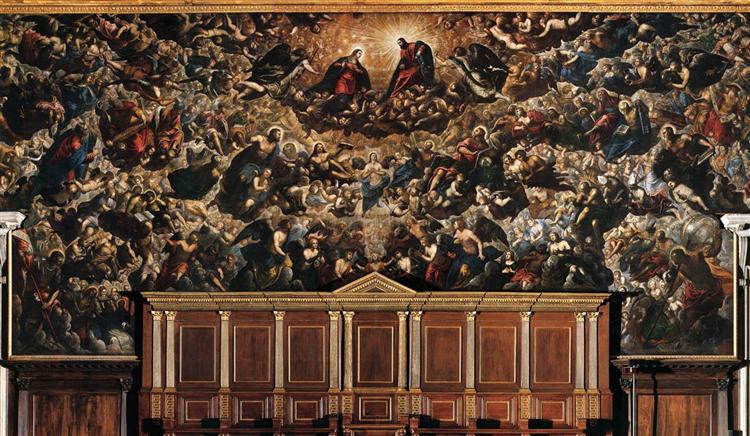 In December 1577, a fire broke out on the ground floor of the Doge's Palace in Venice, resulting in serious damage to the decoration, walls, ceilings, and furnishings of various rooms and significantly affecting the structure of the building. So great was the damage that the idea of demolishing the old Gothic building and replacing it with a new one was seriously considered. After considerable discussion, it was, however, decided to restore the areas affected and to replace the interior decoration. Among the damaged rooms was one of the most celebrated: the Sala del Maggior Consiglio. This large space, whose proportions make it one of the most majestic and imposing in the entire building, was the room where the Great Council met. In the 16th century, the Venetian senators who formed the Council numbered more than 1, 000. The room was used for purposes of legislation and for electing members of the magistracy.

It was decided to restore the room with a flat ceiling divided into sections with decorative, high-relief molding into which paintings would be fitted. The same concept was to be used for the frieze that ran along the two long side walls of the room in which painted portraits of the Doges would be inset. The subject selected to decorate the walls of the room was the Glorification of Venice, depicted through a series of military episodes. Three huge canvases would provide the principal elements in the ceiling. They are a central, rectangular one by Jacopo Tintoretto, depicting The City of Venice offering a laurel Wreath to Doge Nicolò da Ponte (1584) and two flanking, oval ones in which Veronese painted an Allegory of Venice (1585), and Palma Giovane depicted Venice, crowned by Victory, receiving the conquered Provinces (1584).

To replace the medieval fresco of around 1365 by Guariento, which had been damaged in the fire, the commission entrusted with devising and overseeing the new decoration organized a competition that may have been convened in 1582. The theme of this new image was the "Glory of the blessed in Paradise." Among the painters who took part were Francesco Bassano, Veronese, Palma Giovane, and Tintoretto. The commission gave the project to Veronese and Francesco Bassano, two artists with widely differing styles. However, Veronese's death in 1588 and the fact that Bassano had not started his part by the time of Veronese's death resulted in the project being given to Tintoretto, who was seventy years old by this date.

According to the guidelines established for the competition, the composition had to focus on the Coronation of the Virgin, inspired by Dante's Paradise. Tintoretto included the blessed and different religious hierarchies among clouds, angels, and cherubim. The principal motif is the Coronation of the Virgin in the upper center, while the Dove of the Holy Spirit forms the axis of this complex composition. The main group, in which Christ leans forward and extends his hand to crown his mother, emerges between numerous heads and figures against the intense yellow of a cloud of glory. The remaining figures in the canvas are arranged in gently curving lines, floating among clouds and stars. Tintoretto has woven in the traditional iconography of the Annunciation scene, where the angel Gabriel announces that Mary will carry the child of God, together with the Last Judgment, implied by the artist with the symbol of the scales. The clouds wrap around the central figures, almost likes ripples in a pond, suggesting the continued reverberations of the church's teachings - especially significant during the time of the Counter-Reformation.

Seen from afar, Paradiso is nearly an abstract vision composed of rhythmic patterns of light and color. The work represents the culmination of the artist's mastery of sharp contrasts between light and dark in the intensely rendered figures. The dramatic, almost theatrical quality of Tintoretto's scene would lay the foundation for Baroque art.