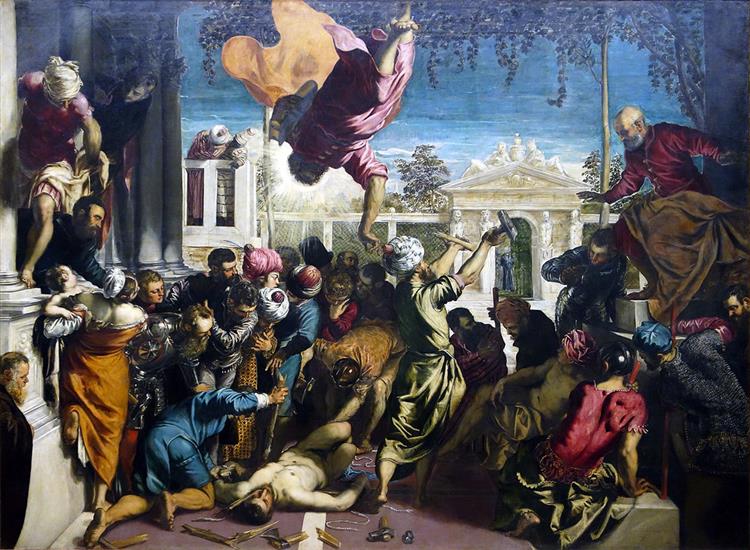 The Miracle of St Mark Freeing the Slave

The painting is the first of a series of works that Tintoretto painted in 1548 for the Scuola Grande di San Marco while Marco Episcopi, artist's future father-in-law, was Grand Guardian of the School.

The subject of the huge canvas is the miraculous appearance of St Mark to rescue one of his devotees, a servant of a knight of Provence, who had been condemned to having his legs broken and his eyes put out for worshipping the relics of St Mark against his master's will. The scene takes place on a kind of proscenium which seems to force the action out of the painting towards the spectator who is thus involved in the amazement of the crowd standing in a semi-circle around the protagonists: the fore-shortened figure of the slave lying on the ground, the dumbfounded executioner holding aloft the broken implements of torture, the knight of Provence starting up from his seat out of the shadow into the light. In contrast, the figure of St Mark swoops down from above.

The overall composition of The Miracle of the Slave, although set within an opulent Roman courtyard, is intense with action. Three times the executioner attempted to levy the punishment, and each time the tools have broken before the slave could be harmed. This is the work of Saint Mark, who, in dramatic fashion, descends from heaven in a red robe and billowing orange cape to rescue the slave and spare him the suffering associated with this painful death. This miracle also converts the slave's master at embracing the Christian faith.

The great influence that Michelangelo had on Tintoretto's artistic style is visible in this work; the robust, muscular figures staged in a variety of complex positions are reminiscent of the Renaissance master. Scholars doubt whether Tintoretto made studies from the sculptural maquettes or other works based on the originals by Michelangelo.

Despite some of the initial criticism Tintoretto received for the speed at which he worked, made evident from the loose and gestural brushwork, this painting had a profound impact on Tintoretto's career. A commission for the Confraternity of Scuola Grande di San Marco brought the artist wide attention, after which he began receiving many commissions. According to Tintoretto's biographers, some members of the confraternity argued against accepting it, enraging the artist, who took it back to his studio. But eventually, the naysayers were discomfited, Tintoretto and his proponents won the day, and the painting was installed to great acclaim. The acceptance of this work was an essential step towards broadening the stylistic range of the Venetian School. In addition to the more traditional approaches of Titian, here, Tintoretto provided a highly dramatic presentation of a religious subject, which helped to lay the foundation for the future development of Baroque art.

The Miracle of the Slave (also known as The Miracle of St. Mark, 1548) is a painting by the Italian Renaissance artist Jacopo Tintoretto. Currently housed in the Gallerie dell'Accademia in Venice, northern Italy, it was originally commissioned for the Scuola Grande di San Marco, a confraternity in the city.


It portrays an episode of the life of Saint Mark, patron saint of Venice, taken from Jacopo da Varazze's Golden Legend. The scene shows, in the upper part, the saint intervening to make invulnerable a slave about to be martyred for his veneration of another saint's relics. All the figures are inscribed into an architectonic scenario.


Different influences on Tintoretto's art can be seen in the picture: while the anatomies are Michelangelo-like, the vivid and intense colors are typical of the Venetian School.