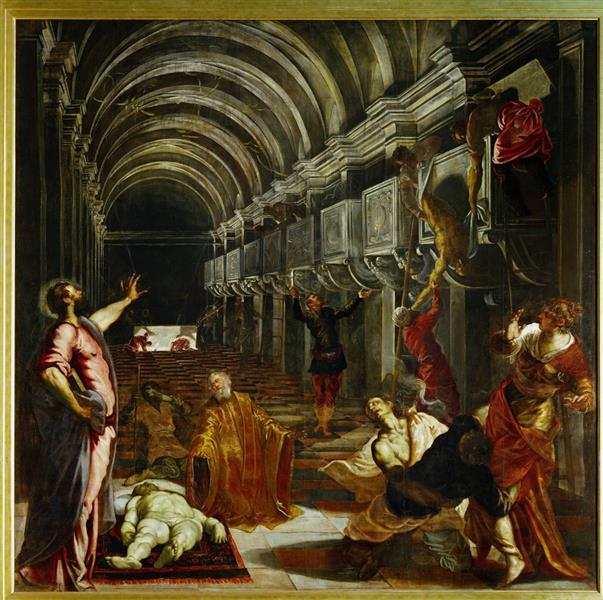 Finding of the body of St Mark

The painting was commissioned by Tommaso Rangone, the “grand guardian” of the Scuola Grande di San Marco in Venice from Tintoretto as part of series of large canvases depicting the acquisition by Venice of the body of Saint Mark.

The painting shows Venetians busy removing corpses from tombs along the right wall and from a crypt in the background. In the left foreground, the standing luminous saint himself with a faint halo appears and beseeches them to stop, because his body has been found and lies pale at his feet, strewn on an oriental rug. In the center of the canvas, an elder (portrait of Rangone) kneels acknowledging the miracle. Elsewhere in the room, the figures are either astonished or oblivious to the apparition.

In places, the work appears unfinished: the tiles of floor and cornices is visible through some clothing and figures. The foreshortening is accentuated by the tiles, and the wall tombs, and finally by rays of light seeming to emerge from the crypt in the background. In the foreground at the right, a contorted half-naked man is described as "possessed by demons", above him hover strands of smoke. Other quizzical markings occur on the ceilings.

Like its companion piece, St Mark's Body Brought to Venice, the composition exemplifies Tintoretto's preference for dramatic effects of perspective and light. According to the art historian Thomas Nichols, "the linear logic of the emptied, boxlike perspective vistas is undermined by an irrational play of light and shade. Both paintings suggest the simultaneous existence of different levels of reality through the use of a range of pictorial techniques."