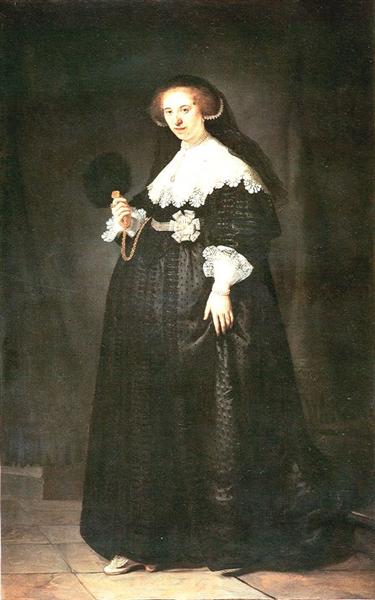 Portrait of Oopjen Coppit (1611-1689) is a painting by the Dutch Golden Age painter Rembrandt, painted on the occasion of her marriage to Marten Soolmans in 1634. It is considered a pendant portrait, and portrait of her husband was included in the 2015 sale as part of a joint collaboration between the Louvre and the Rijksmuseum, purchased from the Rothschild family. The paintings were jointly sold for € 160 million.

This painting was documented by Hofstede de Groot in 1915, who wrote: "638 MACHTELD VAN DOORN (1605-1646), from 1629 the wife of Martin Daey. Sm. 551. ; Bode 304 ; Dut. 209 ; Wb. 317 ; B.-HdG. 108. Full length ; life size. About thirty. She walks to the left along a footpath paved with stones, and looks at the spectator. She holds up in her right hand, by a gold chain, a rich fan of black ostrich feathers ; with her left hand, as she descends a step, she lightly raises her handsome spotted gown of black silk with a high bodice, against which her broad and close-fitting lace collar and her lace-trimmed wristbands stand out in relief. At her waistband and on her shoe are rosettes of lace. Her fair curls are caught up at the back in a cap ; a thick black veil falls from it down her back. At her throat and on her arms are several strings of pearls, and there is a pearl in each ear. A gold ring hangs by a fine chain from her lace collar. In the right background is a bluish-green curtain. [Pendant to 637.]

In the Van Winter collection, Amsterdam, which passed by inheritance to the Van Loons, and was acquired as a whole in 1877 by the Rothschilds. In the collection of Baron Gustave de Rothschild, Paris.

In the collection of Baron Robert de Rothschild, Paris."

The painting was known as the "Portrait of Mevrouw Day" for over a century. She and her husband, who married 9 June 1633, were only properly identified in the 20th-century. The confusion of the names came about because after Marten died, Oopjen remarried Captain Maerten Pietersz. Daij, and she outlived this second husband as well. After her death the paintings remained in the Daij or Daey family and members of that family assumed the portraits were of Daij and his first wife.

Oopjen is wearing a flat lace collar with matching wrist collars in the latest fashion. Other Amsterdam brides of the regency class wore millstone collars well into the 1640s. She is also wearing a pearl necklace and a pearl bracelet, and pearls were considered more valuable than diamonds at that time. The format of the paintings showing the couple at full length was the most expensive form of marriage pendant and could only fit in a house with high ceilings. According to family inventories, they also owned another Rembrandt depicting the Holy Family. It is assumed that this is the Holy Family now in Munich, as that is also dated to 1634.