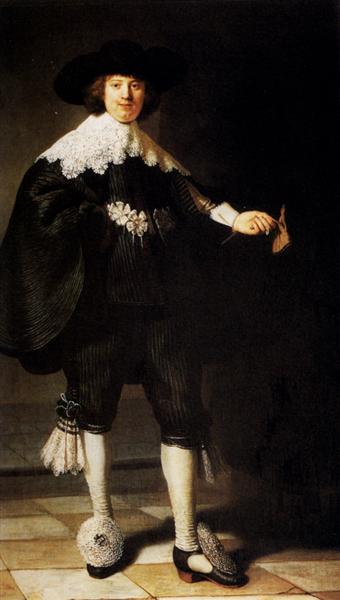 Portrait of Marten Soolmans (1613-1641) is a painting by the Dutch Golden Age painter Rembrandt, painted on the occasion of his marriage to Oopjen Coppit in 1634 and in 2015 purchased from the Rothschilds as part of a joint collaboration between the Rijksmuseum and the Louvre. It is considered a pendant portrait, and the portrait of his wife was included in the sale. Together the paintings were sold for 160 million Euro.

This painting was documented by Hofstede de Groot in 1915, who wrote: "637 MAERTEN DAEY (1604-after 1650). Sm. 340. ; Bode 303 ; Dut. 208 ; Wb. 316 ; B.-HdG. 107. Full length ; life size. About thirty. He is seen almost in full face. He walks a little to the right on the parti-coloured stone floor, at the back of which is a step. He wears a very rich black costume, consisting of a coat with large stripes, breeches, and a short cloak of the same material, a broad and close-fitting lace collar, smooth cuffs, rosettes of lace at his waistband and on his shoes, and white stockings, with bows of rich lace on his garters. A broad-brimmed black slouch hat covers his thick fair hair ; he has a plump and beardless face. His right hand rests on his hip under the cloak ; his out-stretched left hand holds a glove. In the right background is a bluish-green curtain. [Pendant to 638.]

The painting was known as the "Portrait of Meneer Day". He and his wife, who married 9 June 1633, were only properly identified in the 20th-century. The confusion of the names came about because after Marten died, Oopjen remarried Captain Maerten Pietersz. Daij, and she outlived this second husband as well. After her death the paintings remained in the Daij or Daey family and members of that family assumed the portraits were of Daij and his first wife.