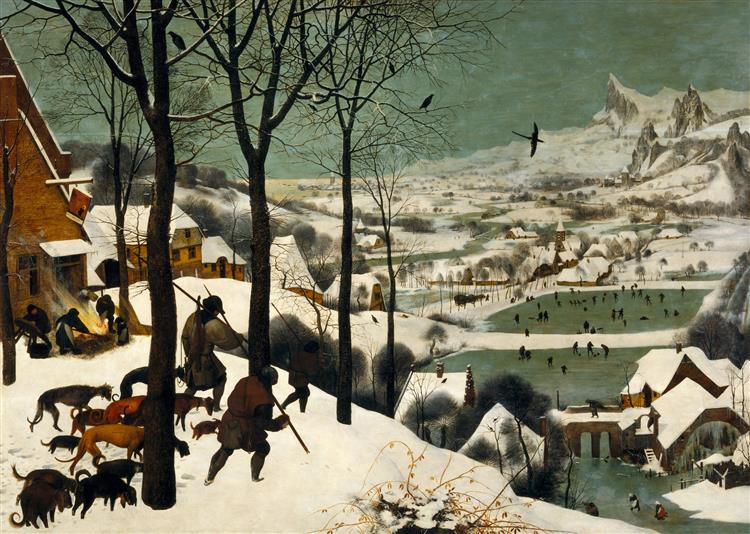 Hunters in the Snow

In his typical peasant genre with landscape scene, Hunters in the Snow is one in a series of six (five surviving) paintings by Brueghel depicting the different seasons of the year. The scene is of hunters returning with their dogs from an unsuccessful hunting expedition. Scientists have used his portrayal of the wintry scene to corroborate evidence on the severity of the Little Ice Age, during which the painting was created. Also created during a time of religious revolution in the Netherlands, Brueghel is giving us a secular illustration of what country life should look like.

The Hunters in the Snow (Dutch: Jagers in de Sneeuw), also known as The Return of the Hunters, is a 1565 oil-on-wood painting by Pieter Bruegel the Elder. The Northern Renaissance work is one of a series of works, five of which still survive, that depict different times of the year. The painting is in the collection of the Kunsthistorisches Museum in Vienna, Austria. This scene is set in the depths of winter during December/January.

The Hunters in the Snow, and the series to which it belongs, are in the medieval and early Renaissance tradition of the Labours of the Months: depictions of various rural activities and work understood by a spectator in Breugel's time as representing the different months or times of the year.

The painting shows a wintry scene in which three hunters are returning from an expedition accompanied by their dogs. By appearances the outing was not successful; the hunters appear to trudge wearily, and the dogs appear downtrodden and miserable. One man carries the "meager corpse of a fox" illustrating the paucity of the hunt. In front of the hunters in the snow are the footprints of a rabbit or hare - which has escaped or been missed by the hunters. The overall visual impression is one of a calm, cold, overcast day; the colors are muted whites and grays, the trees are bare of leaves, and wood smoke hangs in the air. Several adults and a child prepare food at an inn with an outside fire. Of interest are the jagged mountain peaks which do not exist in Belgium or Holland.

The landscape itself is a flat-bottomed valley (a river meanders through it) with jagged peaks visible on the far side. A watermill is seen with its wheel frozen stiff. In the distance, figures ice skate, play hockey with modern style sticks and curl on a frozen lake; they are rendered as silhouettes.

The 1560s was a time of religious revolution in the Netherlands, and Bruegel (and possibly his patron) may be attempting to portray an ideal of what country life used to be or what they wish it to be.

Writing in the "opinion" section of Nature, art historian Martin Kemp points out that Old Masters are popular subjects for Christmas cards and states that "probably no 'secular' subject is more popular than ... Hunters in the Snow".

Hunters in the Snow is used extensively in Russian director Andrei Tarkovsky's films Solaris (1972) and The Mirror (1974), and in Lars von Trier's 2011 film Melancholia. It appears also in Alain Tanner's film Dans la ville blanche (1983). It was an inspiration for Roy Andersson's 2014 film A Pigeon Sat on a Branch Reflecting on Existence, and it is the basis for the first frame of Abbas Kiarostami's 24 Frames (2017).