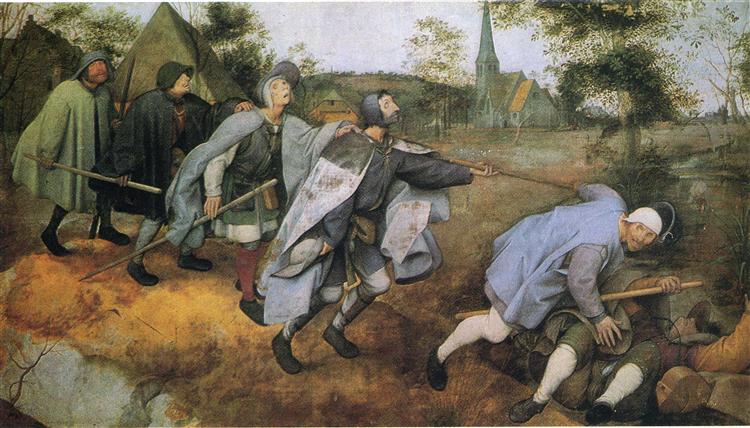 Parable of the Blind

The Blind Leading the Blind, Blind, or The Parable of the Blind (Dutch: De parabel der blinden) is a painting by the Netherlandish Renaissance artist Pieter Bruegel the Elder, completed in 1568. Executed in distemper on linen canvas, it measures 86 cm × 154 cm (34 in × 61 in). It depicts the Biblical parable of the blind leading the blind from the Gospel of Matthew 15:14, and is in the collection of the Museo di Capodimonte in Naples, Italy.

The painting reflects Bruegel's mastery of observation. Each figure has a different eye affliction, including corneal leukoma, atrophy of globe and removed eyes. The men hold their heads aloft to make better use of their other senses. The diagonal composition reinforces the off-kilter motion of the six figures falling in progression. It is considered a masterwork for its accurate detail and composition. Copies include a larger version by Bruegel's son Pieter Brueghel the Younger, and the work has inspired literature such as poetry by Charles Baudelaire and William Carlos Williams, and a novel by Gert Hofmann.

Bruegel painted The Blind the year before his death. It has a bitter, sorrowful tone, which may be related to the establishment of the Council of Troubles in 1567 by the government of the Spanish Netherlands. The council ordered mass arrests and executions to enforce Spanish rule and suppress Protestantism. The placement of Sint-Anna Church of the village Sint-Anna-Pede has led to both pro- and anti-Catholic interpretations, though it is not clear that the painting was meant as a political statement.

The painting depicts a procession of six blind, disfigured men. They pass along a path bordered by a river on one side and a village with a church on the other. The leader of the group has fallen on his back into a ditch and, because they are all linked by their staffs, seems about to drag his companions down with him. A cowherd stands in the background.

Bruegel based the work on the Biblical parable of the blind leading the blind from Matthew 15:14, in which Christ refers to the Pharisees. According to art critic Margaret Sullivan, Bruegel's audience was likely as familiar with classical literature as with the Bible. Erasmus had published his Adagia two years before Bruegel's painting, and it contained the quotation "Caecus caeco dux" ("the blind leader of the blind") by Roman poet Horace. Bruegel expands the two blind men in the parable to six; they are well dressed, rather than wearing the peasant clothing that typifies his late work. The first blind man's face is not visible; the second twists his head as he falls, perhaps to avoid landing face-first. The shinguard-clad third man, on his toes with knees bent and face to the sky, shares a staff with the second, by which he is being pulled down. The others have yet to stumble, but the same fate seems implied.

The faces and bodies of the blind men, and background detail including the church, are rendered in exceptionally fine detail. The backward-falling posture of the guide demonstrates Bruegel's mastery of foreshortening. Bruegel's settings tend to be fictional, but that of The Blind Leading the Blind has been identified as the village Sint-Anna-Pede, and the church as Sint-Anna Church.