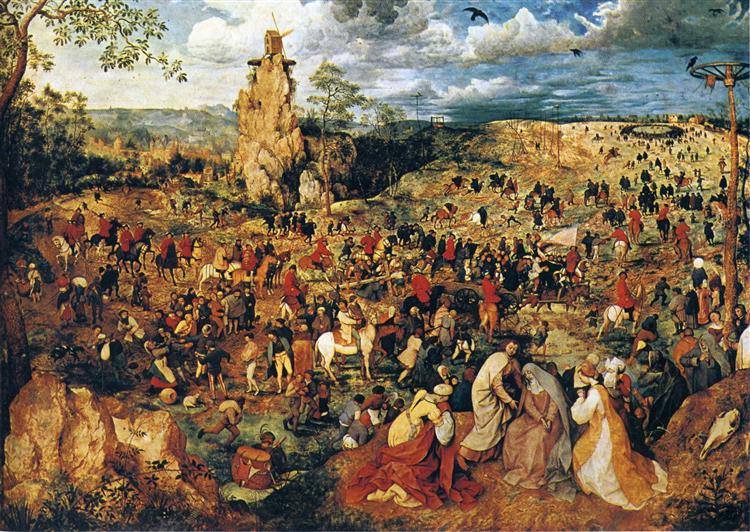 The Procession to Calvary

This is the second-largest known painting by Bruegel (after The Wine of Saint Martin's Day). For Bruegel the composition is unusually traditional. Perhaps because he was treating such a solemn religious event, he adopted a well-known scheme. Christ's insignificance among the crowds is a familiar device of mannerist painting, as is the artificial placing of Mary and her companions in a rocky foreground, which is deliberately distanced from the dramatic events taking place behind them.

The Procession to Calvary is an oil-on-panel by the Netherlandish Renaissance artist Pieter Bruegel the Elder of Christ carrying the Cross set in a large landscape, painted in 1564. It is in the Kunsthistorisches Museum in Vienna.

This is the second-largest known painting by Bruegel. It is one of sixteen paintings by him which are listed in the inventory of the wealthy Antwerp collector, Niclaes Jonghelinck, drawn up in 1566. It was Jonghelinck who commissioned the Months from Bruegel and he may also have commissioned this work. Jonghelinck's Bruegels passed into the possession of the city of Antwerp in the year in which the inventory was made. In 1604 it was recorded in the Prague collections of Rudolf II, Holy Roman Emperor, then transferred to Vienna, and in 1809 (until 1815) in Paris, requisitioned by Napoleon Bonaparte as part of his war booty.

For Bruegel the composition is unusually traditional. Perhaps because he was treating such a solemn religious event, he adopted a well-known scheme, used previously by the Brunswick Monogrammist and Bruegel's Antwerp contemporary, Pieter Aertsen. Christ's insignificance among the crowds is a familiar device of mannerist painting (it recurs in the Preaching of John the Baptist, as well as The Conversion of Paul), as is the artificial placing of Mary and her companions in a rocky foreground, which is deliberately distanced from the dramatic events taking place behind them.

Bruegel's treatment of landscape evolves in the course of his career from the bird's-eye views and extensive landscapes of the Large landscape series to the remarkable naturalism of the Months. Impossibly sheer outcrops of rock like this one at left characterize the landscape tradition of the Antwerp school founded by Joachim Patinir. Patinir's followers - in particular Herri met de Bles, Matthys Cock (the brother of Bruegel's print publisher, Hieronymous Cock) and Cornelis Matsys - had turned his style into a popular but stale formula. The sequence of Bruegel's landscape drawings and of the landscape in his paintings shows the gradual abandonment of this formula. In this case, however, his desire to convey the rocky, unfamiliar terrain of the Holy Land causes him to fall back on the ready-made landscape features of the Antwerp school.

In a detail such as this at right, Bruegel's painting possesses a vividness which would seem to come from his observation of contemporary life. Public executions were a familiar feature of 16th century life, especially in troubled Flanders. Here Bruegel shows the two thieves who were to hang on either side of Christ being trundled to the place of execution. Anachronistically, both clutch crucifixes and are making their final confessions to the cowled priests beside them. The thieves, their confessors and the ghoulish spectators who surround the cart are all in contemporary dress. In Bruegel's day public executions were well attended occasions which had the air of festivals or carnivals. Here Bruegel shows the absolute indifference of the gawping crowds to the fear and misery of the condemned men. (Elsewhere in the picture he shows the pickpockets and the pedlars who preyed upon the crowds at such events.) It is noteworthy that Bruegel makes no distinction between the two thieves, one of whom Christ was to bless.