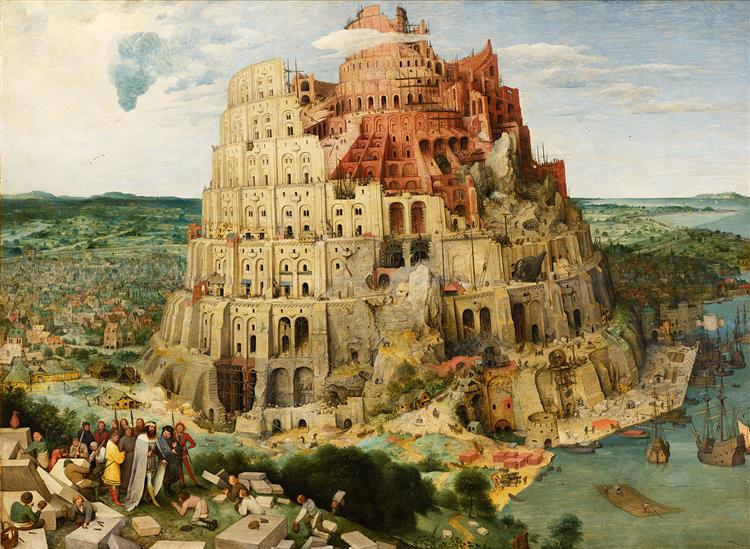 The Tower of Babel

The Tower of Babel is the subject of three oil paintings by Pieter Bruegel the Elder. The first, a miniature painted on ivory, was painted while Bruegel was in Rome and is now lost. The Tower of Babel is on display at the Kunsthistorisches Museum, Vienna. Another painting of the same subject The "Little" Tower of Babel, c. 1563, is in the Museum Boijmans Van Beuningen in Rotterdam.

Bruegel's depiction of the architecture of the tower, with its numerous arches and other examples of Roman engineering, is deliberately reminiscent of the Roman Colosseum, which Christians of the time saw as both a symbol of hubris and persecution.

The Tower of Babel was the subject of three paintings by Pieter Bruegel the Elder. The first, a miniature painted on ivory, was painted while Bruegel was in Rome and is now lost. The two surviving paintings, often distinguished by the prefix "Great" and "Little", are in the Kunsthistorisches Museum, Vienna and the Museum Boijmans Van Beuningen in Rotterdam respectively. Both are oil paintings on wood panels.

The Rotterdam painting is about half the size of the Vienna one. In broad terms they have exactly the same composition, but at a detailed level everything is different, whether in the architecture of the tower or in the sky and the landscape around the tower. The Vienna version has a group in the foreground, with the main figure presumably Nimrod, who was believed to have ordered the construction of the tower, although the Bible does not actually say this. In Vienna the tower rises at the edge of a large city, but the Rotterdam tower is in open countryside.

The paintings depict the construction of the Tower of Babel, which, according to the Book of Genesis in the Bible, was built by a unified, monolingual humanity as a mark of their achievement and to prevent them from scattering: "Then they said, 'Come, let us build ourselves a city, and a tower with its top in the heavens, and let us make a name for ourselves; otherwise we shall be scattered abroad upon the face of the whole earth.'" (Genesis 11:4).

Bruegel's depiction of the architecture of the tower, with its numerous arches and other examples of Roman engineering, is deliberately reminiscent of the Roman Colosseum, which Christians of the time saw as a symbol of both hubris and persecution. Bruegel had visited Rome in 1552–1553. Back in Antwerp, he may have refreshed his memory of Rome with a series of engravings of the principal landmarks of the city made by the publisher of his own prints, Hieronymous Cock, for he incorporated details of Cock's engravings of Roman views in both surviving versions of the Tower of Babel.

The parallel of Rome and Babylon had a particular significance for Bruegel's contemporaries: Rome was the Eternal City, intended by the Caesars to last forever, and its decay and ruin were taken to symbolize the vanity and transience of earthly efforts. The Tower was also symbolic of the religious turmoil between the Catholic church (which at the time conducted all services in Latin) and the polyglot Protestant religion that was increasingly popular in the Netherlands. The subject may have had a specific topicality, as the famous Polyglot Bible in six languages, a landmark in Biblical scholarship, was published in Antwerp in 1566. Although at first glance the tower appears to be a stable series of concentric pillars, upon closer examination it is apparent that none of the layers lies at a true horizontal. Rather the tower is built as an ascending spiral.

The workers in the painting have built the arches perpendicular to the slanted ground, thereby making them unstable, and a few arches can already be seen crumbling. The foundation and bottom layers of the tower had not been completed before the higher layers were constructed.