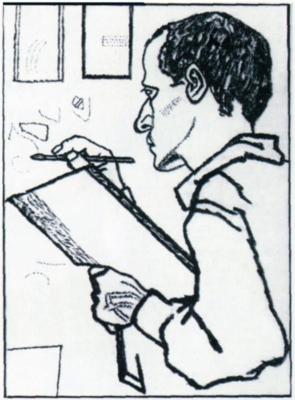 Pavel Filonov was a prominent Russian art theorist, painter, and poet. He began art lessons in St. Petersburg at around fourteen years of age, and in 1908, at around age 25, entered the St. Petersburg Academy of Arts. After his expulsion from the Academy in 1910, he joined the Russian art group Soyuz Molodyozhi, and was a contributor to the group’s magazine. In 1912, he published an essay The Canon and the Law in which he expounded his ideas on analytical realism, also known as “Universal Flowering,” which refuted the surface geometry of cubism. Filonov’s artistic philosophy revolved around the desire to reveal the inner soul of the objects in the painting, a belief system he remained devoted to his entire life. Later in his artistic career he was also close to Russian futurist painters Vladimir Mayakovsky and Velimir Khlebnikov.

Upon the beginning of World War I, Filonov enlisted and served on the Romanian front. Perhaps his experiences in the war led him to also be an active member in the Russian Revolution of 1917, serving as Chairman of the Revolutionary War Committee of Dunay Region. His first exhibition was in 1919, after the tumult of the war and revolution, and beginning in 1923 served as a professor at the St. Petersburg Academy of Fine Arts, the same academy from which he had been expelled thirteen years earlier.

During his career he organized the large art school of Master of Analytical Realism, which eventually had up to seventy members. Staying true to his artistic theory, Filonov rarely made money from his paintings, as he refused to sell them to individual patrons. His desire was to give them all to the Russian Museum as a gift, so they could start a Museum of Analytical Realism. His economic hardships worsened, however, due to the strict Soviet restrictions on artists and their exhibitions, and he starved to death in 1941, during the Nazi Siege of Leningrad.

For a time after his death, it was forbidden to exhibit any of Filonov’s works, which would have made them easy to steal. There was a legend, however, that his paintings were protected by the ghost of Filonov, and anyone trying to steal them would die, become paralyzed, or suffer a terrible misfortune. Filonov’s desire to gift his works to the Russian Museum was finally realized after his death, when many of his works, which had been saved by his sister, were given to the museum.

In 1910–1914, he took part in the arts group Soyuz Molodyozhi created by artists Elena Guro and Mikhail Matyushin. In 1912, he wrote the article The Canon and the Law, in which, he formulated the principles of analytical realism, or "anti-Cubism". According to Filonov, Cubism represents objects using elements of their surface geometry but "analytical realists" should represent objects using elements of their inner soul. He was faithful to these principles for the remainder of his life.

During the years 1913 to 1915, Filonov was close to Vladimir Mayakovsky, Velimir Khlebnikov, and other futurists. He co-illustrated Khlebnikov's Selected Poems with Postscript, 1907–1914 alongside Kazimir Malevich during this time. In the autumn of 1916, he enlisted for service in World War I, and served on the Romanian front. Filonov participated actively in the Russian Revolution of 1917 and served as the Chairman of the Revolutionary War Committee of Dunay region.

In 1919, he exhibited in the First Free Exhibit of Artists of All Trends at the Hermitage. In 1923, he became a professor of St. Petersburg Academy of Arts and a member of the Institute for Artistic Culture (INKhUK). He organized a large arts school of Masters of Analytical Realism (over seventy artists). Their work influenced suprematism and expressionism.

In 1929, a large retrospective exhibition of Filonov art was planned at the Russian Museum; however, the Soviet government forbade the exhibition from going forward. From 1932 onward, Filonov literally starved but still refused to sell his works to private collectors. He wanted to give all his works to the Russian Museum as a gift so as to start a Museum of Analytical Realism. He died of starvation on December 3, 1941 during the Nazi Siege of Leningrad.

Under the umbrella of Universal Flowering, Filonov put forth a manner of working that proceeded from the particular to the general. He believed that objects and fields should be built up from small details and bits and stated that doing it the other-way-round was nothing short of "charlatanism". To this end, he worked, and required his students to work, with very small brushes in painting and the finest of points when drawing.

During the period of half-legal status of Filonov's works it was seemingly easy to steal them; however, there was a legend that Filonov's ghost protected his art and anybody trying to steal his paintings or to smuggle them abroad would soon die, become paralyzed, or have a similar misfortune.