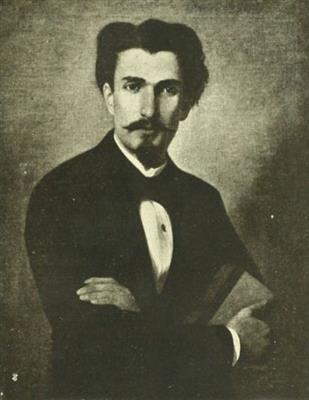 Odoardo Borrani (22 August 1833 – 14 September 1905) was an Italian painter associated with the Macchiaioli group.


He was born in Pisa. The Borrani family moved to Florence, where Odoardo enrolled at the Academy of Fine Arts in 1853. There, he studied under Gaetano Bianchi [it], Giuseppe Bezzuoli, and Enrico Pollastrini. However, he became independent of the academic styles.


His first painting while at the Academy was titled Un veglione di maschere alla Pergola. In 1859, he painted Lorenzo the Magnificent Saves Himself From Being Murdered in the Sacristy of the Cathedral, an episode of the Pazzi Conspiracy. For this painting. Borrani was awarded the Gold medal by the contest of the Accademia of Florence. That same year, he joined the army and upon returning from the short campaign, he painted the Cadaver of Jacopo de' Pazzi and Michelangelo Directs the Fortification of Florence.


It was with his new friends Telemaco Signorini and Vincenzo Cabianca that he took up painting from life and came into contact with the Macchiaioli group gravitating around the Caffè Michelangiolo. He served as a volunteer in the Second Italian War of Independence in 1859. In 1862, together with Giuseppe Abbati, Silvestro Lega, Raffaello Sernesi and Signorini, he went to work in the countryside outside Florence near Piagentina, in consequence of which these painters became known as the school of Piagentina. It was also in 1862 that he first spent the summer at Castiglioncello, as the guest of the critic Diego Martelli.


In 1875, he and Lega established a gallery to promote younger artists, but it soon went out of business. He exhibited less frequently in his later years and made his living as a teacher, ceramic decorator, and graphic artist for L’Illustrazione Italiana. He died of peritonitis in Florence on 14 September 1905.