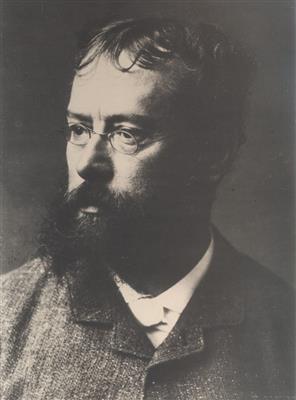 Telemaco Signorini (Italian pronunciation: [teˈlɛːmako siɲɲoˈriːni]; August 18, 1835 – February 1, 1901) was an Italian artist who belonged to the group known as the Macchiaioli.


He was born in the Santa Croce quarter of Florence, and showed an early inclination toward the study of literature, but with the encouragement of his father, Giovanni Signorini (1808-1864), a court painter for the Grand Duke of Tuscany, he decided instead to study painting. In 1852 he enrolled at the Florentine Academy, and by 1854 he was painting landscapes en plein air. The following year he exhibited for the first time, showing paintings inspired by the works of Walter Scott and Machiavelli at the Società Promotrice delle Belle Arti.


In 1855, he began frequenting the Caffè Michelangiolo in Florence, where he met Giovanni Fattori, Silvestro Lega, Saverio Altamura and several other Tuscan artists who would soon be dubbed the Macchiaioli. The Macchiaioli, dissatisfied with the antiquated conventions taught by the Italian academies of art, started painting outdoors in order to capture natural light, shade, and color. They were forerunners of the Impressionists who, beginning in the 1860s, would pursue similar aims in France.


Signorini was a volunteer in the Second Italian War of Independence in 1859, and afterwards painted military scenes which he exhibited in 1860 and 1861. He made his first trip outside Italy in 1861 when he visited Paris, to which he would often return in the decades that followed. There he met Degas and a group of expatriate Italian artists in his orbit, including Giovanni Boldini, Giuseppe De Nittis, and Federico Zandomeneghi; unlike them, however, Signorini remained rooted in Italy. He became not only one of the leading painters of the Macchiaioli, but also their leading polemicist. Art historian Giuliano Matteucci has written: "If we acknowledge Fattori and Lega as the major creative figures of the macchiaioli, then Signorini must surely be recognized as their 'deus ex machine'", describing his role as "that of catalyst and energetic doctrinarian. In transforming attention away from history painting and the academic portrait towards a new poetical interpretation of natural landscape, the part of Signorini was of fundamental consequence to macchiaioli painting."


His presence at exhibitions was frequent and prolific. In 1860, at the Società Promotrice, he exhibited seven paintings, including I Toscani a Calcinato (The Calcined Tuscans). In 1861, he sent to Turin a somewhat polemical The ghetto of Venice. In 1865, he exhibited Le pazze (The Crazy Ones). In 1869 he made a series of etchings, and visited Paris for the second time. In 1870, at the Expositions of Parma and the Società Promotrice, he exhibited November which received a prize. In 1873, he traveled to Paris and London with De Nittis. Signorini exhibited Fuori porta Arianna a Ravenna (Outside the Arianna Gate, Ravenna) at the Exposition of Naples in 1877. His painting L'alzaia (The Towpath, completed in the 1860s) won awards at the Exposition of Vienna of 1874. In 1880, he exhibited in Turin the painting depicting The Ponte Vecchio. In 1881, he traveled to paint in Scotland.