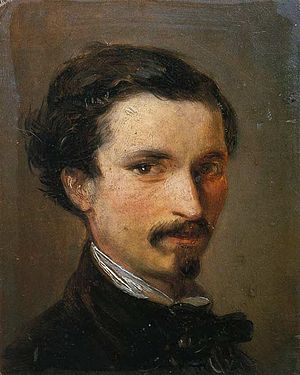 Silvestro Lega (8 December 1826 – 21 September 1895) was an Italian realist painter. He was one of the leading artists of the Macchiaioli and was also involved with the Mazzini movement.


He was born in Modigliana, near Forlì, to an affluent family. From 1838 he attended the Piarist College, where his skill at drawing became evident. From 1843 to 1847 he attended the Accademia di Belle Arti, Florence, studying drawing under Benedetto Servolini (1805–79) and Tommaso Gazzarini (1790–1853), then studying painting, briefly, under Giuseppe Bezzuoli. During 1847 he attended Luigi Mussini’s school, where the teaching emphasized the 15th-century Florentine principles of drawing and orderly construction. Then and for some years afterwards he continued to attend the Scuola del Nudo of the Accademia.


As a Garibaldian volunteer, Lega participated in the military campaigns for Italian independence (1848–49) before resuming his training, this time under Antonio Ciseri. In 1850 he completed his first large-scale painting, Doubting Thomas (Modigliana, Osp. Civ.). In 1852 he won the Concorso Trienniale dell’Accademia with David Placating Saul. On 30 January 1853, he became a member of the Accademia degli Incamminati of Modigliana. In 1855, Lega returned to his native town, where he remained until 1857.


Serious by nature, Lega was an infrequent visitor of the Caffè Michelangiolo, a favorite meeting place in the 1850s for the young painters who later became known as the Macchiaioli. Diego Martelli, a contemporary of Lega, wrote of him that "he was not one of those people who, artistically speaking, can fling themselves into novel developments .... In spite of the discussions that went on nightly in the crucible of the Caffè Michelangiolo, Lega's art, until 1859, remained conspicuously academic." Subsequently, Lega's style began moving towards Realism and away from the Purismo of Mussini. This progress is evident in the four lunettes he painted between 1858 and 1863 for the Oratory of the Madonna del Cantone in Modigliana, and in several military-themed works he painted during that period. Together with his Macchiaioli friends Odoardo Borrani, Giuseppe Abbati, Telemaco Signorini and Raffaello Sernesi, he started painting landscapes en plein air.


From 1861 to 1870, he lived with the Batelli family, near the Affrico river, and started a relationship with the elder daughter, Virginia. The children and women of the Batelli family were the subjects of many of his paintings during this happy period of his life.


In 1870, he was awarded the silver medal at the Parma's National Exposition. In that same year, Virginia Batelli, his companion, died of tuberculosis. Three of Lega's brothers also died at about this time. The grieving Lega returned to Modigliana. Depressed, and experiencing the onset of eye problems, he ceased painting almost entirely for four years between 1874 and 1878. In 1875, he and Borrani established a modern art gallery in Florence, but it quickly failed, and Lega's financial problems worsened. In 1878 he took part in the preparation of the Parigi's Universal Exposition. At the Florentine Promotrice in 1879, Lega—who never traveled outside Italy—saw two Impressionist paintings by Camille Pissarro, which he admired.