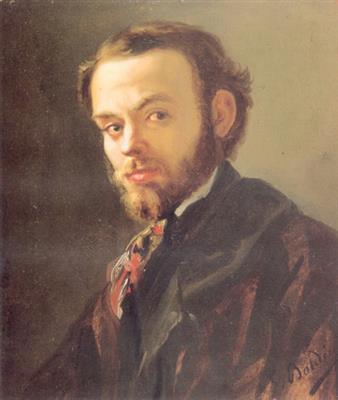 
He was born in Verona in modest circumstances. He began his artistic training at the Verona Academy under Giovanni Caliari, and then studied at the Venice Academy from 1845 to 1847. An admirer of Giuseppe Mazzini, he became associated with the Young Italy movement and was taken prisoner while participating in the defense of Bologna in 1848. After his release he lived in Venice from 1849 until 1853.


During the 1850s Cabianca became acquainted with the artists, including Adriano Cecioni, Cristiano Banti, and Telemaco Signorini, who frequented the Caffè Michelangiolo in Florence, who would be known as the Macchiaioli. He became a friend of Signorini, and travelled with Signorini and Banti to Paris. His friend's influence led Cabianca to turn away from genre paintings towards a bolder realism, beginning in 1858. Like the other Macchiaioli, he painted landscapes en plein air, but he was more reluctant than his friends were to abandon historical and literary subjects.


Cabianca emphasized powerful value contrasts in his paintings. Cecioni described him as "the most declared, violent and uninhibited macchiaiolo." Angelo de Gubernatis, who termed the Macchiaioli "enemies of all conventionalism and accurate researchers of effects", described Cabianca as principally interested in the effects of sunlight. Gottardo Garollo in his Dizionario Biografico describes Cabianca as a painter of the "effects of the Sun".


The works of Cabianca's later years show the influence of the Symbolists and the Pre-Raphaelites. He died in Rome on March 21, 1902.