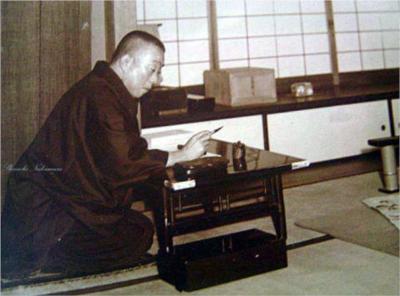 Kiyokata Kaburagi (鏑木 清方, Kaburagi Kiyokata, August 31, 1878 – March 2, 1972) was the pseudonym of a Nihonga artist and the leading master of the bijin-ga genre in Taishō and Shōwa period Japan. His real name was Kaburagi Kenichi. Incidentally, although his name is universally transliterated as "Kaburagi" by western sources (and many Japanese sources), Kaburagi himself used the pronunciation "Kaburaki".

He was born in Kanda district of Tokyo to an affluent and literate family. His father was the founder and president of the Tokyo Nichi Nichi Shimbun newspaper, and a writer of popular novels. In 1891, young Kaburagi was sent to become a disciple of ukiyo-e artists Mizuno Toshikata and Taiso Yoshitoshi when he was 13 years old. His first job was as an illustrator for Yamato Shinbun, a Tokyo newspaper founded by his father. When he was sixteen, his father went bankrupt and the family had to sell their home.

Kaburagi initially made his living as an illustrator, producing frontispieces called kuchi-e, illustrating the titles of popular novels. His works were highly praised by noted author Kyōka Izumi, who insisted that his novels be illustrated by Kaburagi. However, Kaburagi's first and foremost interest was in painting. In 1901, he helped create the Ugokai (烏合会), an art group dedicated to reviving and popularizing the bijin-ga (images of beautiful women) genre. When the government-sponsored Bunten exhibitions were started in 1907, Kaburagi began to paint full-time, winning several prizes.

In 1915, his work Murasame won first prize at the 9th Bunten Exhibition.

In 1917, together with Hirafuku Hyakusui, Matsuoka Eikyu, Kikkawa Reika and Yuki Somei, he helped found the Kinreisha, a Nihonga association training promising young artists, including Kawase Hasui. When Watanabe Shōzaburō started an export woodcut print business, he needed many talented artists to make print designs appealing to western audiences. Kaburagi's group became a recruiting center for Watanabe. Kaburagi organized exhibitions with works of his students and introduced his best students to Watanabe. Next to Watanabe himself, it was probably Kiyokata Kaburagi, who had the greatest influence on the development and promotion of the shin-hanga movement. Not only Kawase Hasui, but also Itō Shinsui, Shiro Kasamasu, Yamakawa Shūhō, Torii Kotondo and Terashima Shimei were trained by Kaburagi and then introduced to Watanabe.

When Kaburagi had reached his late 40s, he was well established and a highly respected artist. In 1929 he became a member of the Imperial Fine Art Academy (Teikoku Bijutsuin). His portrait of rakugo actor San'yūtei Enchō (1930) has been registered as an Important Cultural Property (ICP) by the Agency for Cultural Affairs. In 1938 he was appointed to the Art Committee of the Imperial Household. He received the official position of court painter in 1944. In 1946, he was asked to be one of the judges for the first post-war Nitten Exhibition. In 1954, he received the Order of Culture.

His house in Tokyo was burned down during the firebombing of Tokyo in World War II, and he relocated to Kamakura, Kanagawa Prefecture, where he lived until his death.