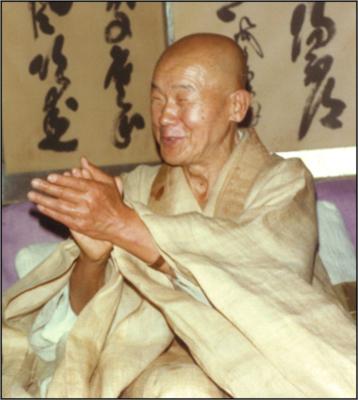 Sōen Nakagawa (中川 宋淵, Nakagawa Sōen, born Motoi Nakagawa; March 19, 1907 – March 11, 1984) was a Taiwanese-born Japanese rōshi and Zen Buddhist master in the Rinzai tradition. An enigmatic figure, Nakagawa had a major impact on Zen as it was practiced in the 20th century, both in Japan and abroad.

Soen Nakagawa was born as Motoi Nakagawa on March 19, 1907 in Keelung, Taiwan as the eldest of three boys: Matoi, Tamotsu and Sonow. His father, Suketaro Nakagawa, was an army medical officer and his mother's name was Kazuko. His family moved shortly after to Iwakuni, and then finally to Hiroshima. In 1917, at age 12, Nakagawa's father died, leaving his mother Kazuko a young widow. Soen's younger brother, Tamotsu, died soon after in his early childhood. His mother was forced to work to make ends meet and educate her young children herself. It was an unforgiving childhood for Soen. Soen's family was of samurai class, so in his youth he was trained as a samurai. But Soen was much more interested in the arts, where at a young age he displayed a gift for poetry.

In 1923, Soen (still Matoi) entered high school and became a boarder at the First Academy in Tokyo. Soen's childhood friend, Yamada Koun, enrolled on the same day as him. The two became roommates there and remained lifelong friends. It was expected that Soen would carry on the samurai tradition of his father, but Soen was pondering a more spiritual occupation. On one occasion Koun recalled young Soen talking once about how he was sitting zazen atop a platform on the balancing bars in the playground resulting in a "natural self-realization". Koun found this rather odd. Soen would write later, as a monk, that his high school years were spent in search of a meaningful occupation. At the school library Soen read a passage on impermanence and deluded approaches towards happiness by Schopenhauer, which provided young Soen with a sense of clarity. Soen next read Orategama by Hakuin, and found again great clarity in the words. He gave a copy to Yamada Koun, who showed great interest in Zen afterward.

In 1927, Soen and Yamada entered Tokyo Imperial University together, where Soen stayed in a dorm at the Pure Land temple Gangyo-ji. He majored in Japanese Literature, and it was here that he continued writing his poetry. While at the university Soen studied classics of both the East and West. He studied Buddhist sutras and even the Holy Bible. Life on campus was fun for him, he frequented the theater to hear renditions of classical masters and had a band of friends immersed within the artistic community of Japan. Soen even started a small group at the university for people to sit zazen together, a tradition that lives on at the university to this day. Soen's final thesis was on the famous haiku poet, Matsuo Bashō.

In 1931 Nakagawa and Yamada graduated from Tokyo Imperial University, and it would be several years before the two would meet again. A short while after graduation Soen attended a Dharma talk by Rinzai Zen master Keigaku Katsube at Shorin-ji and knew he wanted to become a monk. Soen wanted to be ordained on his birthday at Kogaku-ji, once the monastery of his favorite Zen master Bassui. His mother felt he was throwing away his education, but knew he was a grown man who had to make his own decisions. So on March 19, 1931, Soen was ordained as a Zen monk by Keigaku Katsube at Kogaku-ji and given his Dharma name Soen. Just like Bassui, Soen began travelling to Dai Bosatsu Mountain in Kai province (near Mt. Fuji) doing solitary retreats as a hermit and then returning to the monastery to resume his duties as a monk. On the mountain Soen sat zazen and write haikus, bathing in nearby streams and living off of the land. One day while on the mountain he nearly killed himself by eating poisonous mushrooms, and some peasants from nearby took him in and nursed him back to health. During this time Soen also becomes a friend and informal pupil of Dakotsu Iida, the now famous haiku poet. He later sent his work to Iada and had it published in Iida's haiku journal, Unmo. In 1932 Nakagawa first dreams up the idea of an International Dai Bosatsu Zendo while meditating on Dai Bosatsu Mountain, travelling to Sakhalin Island in Siberia in an empty search for gold to fund the project. It was also on Dau Bosatsu Mountain that Soen came up with his original mantra, "Namu dai bosa". In 1933 Nakagawa completes his haiku anthology Shigan (Coffin of Poems). That following year, 1934, selections from Shigan were published in the haiku journal Fujin Koron.