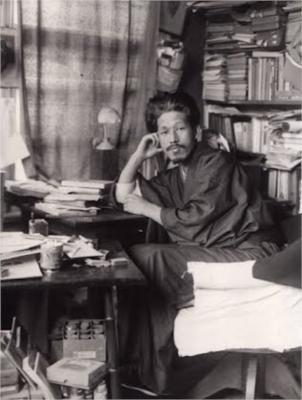 Onchi came from an aristocratic family that had close connections with the imperial family. As a child, he received the same kind of education that a prince received. Onchi was trained in both traditional calligraphy and modern western art. After contacts with Takehisa Yumeji in 1909, between 1910 and 1915, he studied oil painting and sculpture at the Tokyo School of Fine Arts (東京美術学校, Tōkyō Bijutsu Gakkō). In 1912, he founded the print and poetry magazine called "Tsukubae".

Onchi was also a book designer in the early days when it was impossible for sōsaku-hanga artists to survive by just doing creative prints. He designed over 1000 books in his career. In 1939, he founded the First Thursday Society (一木会, Ichimokukai), which was crucial to the postwar revival of the sōsaku-hanga movement. The society held artist gatherings once a month in Onchi’s house. Members such as Gen Yamaguchi (1896–1976) and Junichirō Sekino (1914–1988) discussed subjects of prints. The American connoisseurs Ernst Hacker, William Hartnett and Oliver Statler also attended. The First Thursday Collection (一木集, Ichimoku-shū), a collection of prints by members to circulate to each other, was produced in 1944. Through the First Thursday Society, Onchi provided aspiring young artists with resources and comradeship during the war years when resources were scarce and censorship severe. After the war, he emerged as the leader of the sōsaku-hanga movement that flourished in the international art scene.

Onchi's prints range from early representational to postwar abstract prints. As an early advocate of the sōsaku-hanga movement, Onchi believed that artistic creation originates from the self. He was more interested in expressing subjective emotions through abstract prints than in replicating images and forms in the objective world. His prints evoke lyrical and poetic mood. He said:

From around 1932, Onchi worked on the design of a number of books about photography published by Genkōsha (玄光社) and Ars. He also became interested in photography. Through the 1930s and 1940s, Onchi worked in the spirit of shinkō shashin. He worked on plants, animals and objets, and also created photograms.

Onchi was sent to China in 1939 and later the same year returned to Tokyo and had an exhibition of his Chinese works.

Onchi exhibited his photograms in 1951 but otherwise dropped out of photography. He died in Tokyo on 3 June 1955.