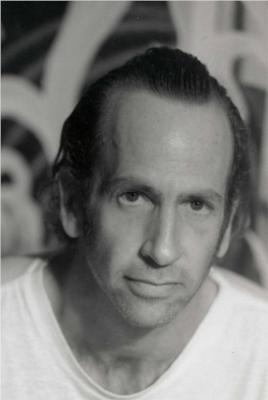 Kenny Scharf (born 1958) is an American painter who lives in Los Angeles, California. He was born in Los Angeles and moved to Manhattan, New York City to receive his B.F.A. in 1980 with a major in painting at the School of Visual Arts . He is known for his participation in the interdisciplinary East Village art scene during the 1980s alongside Jean-Michel Basquiat and Keith Haring. His do-it-yourself practice spanned painting, sculpture, fashion, video, performance art, and street art. Growing up in post-World War II Southern California, Scharf was fascinated by television and the futuristic promise of modern design. His works often consist of pop culture icons, such as the Flintstones and the Jetsons, or caricatures of middle-class Americans in an apocalyptic science fiction setting.

In the East Village of the 1980s, Scharf began his trademark Cosmic Caverns, immersive black light and Day-Glo paint installations that also function as ongoing disco parties. The first was known as the "Cosmic Closet" and was installed in 1981 in the Times Square apartment he shared with Keith Haring. During this period, he also had important shows at Fun gallery (1981) and Tony Shafrazi (1984), before seeing his work embraced by museums, such as the Whitney, which selected him for the 1985 Whitney Biennial. Art scribe Demetria Daniels writing in Downtown Magazine said about his work that it... "leaves you with hope, joy, play and optimism, and a sense of love...." Recently, Scharf had a one-person exhibition at the Hammer Museum. And, in 2017, he mounted "BLOX and BAX", his latest one-person exhibition at Honor Fraser Gallery in Los Angeles (his fifth with the gallery). Also in 2017 his work was featured in the large group exhibition "Fast Forward: Painting From the 1980s" at the Whitney Museum. In October 2017, Scharf's work will be included in the exhibition "Club 57: Film, Performance, and Art in the East Village, 1978–1983" at the Museum of Modern Art in New York.