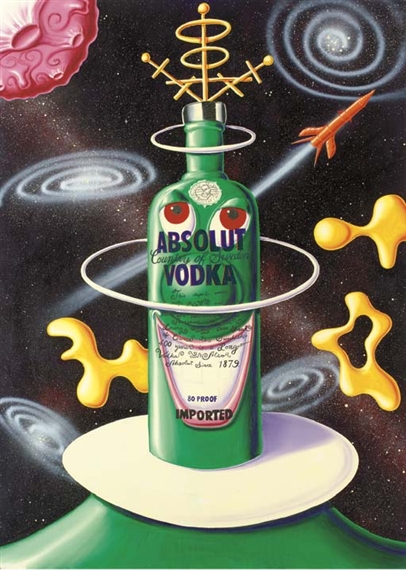 Lowbrow, or lowbrow art, describes an underground visual art movement that arose in the Los Angeles, California, area in the late 1970s. It is a populist art movement with its cultural roots in underground comix, punk music, and hot-rod cultures of the street. It is also often known by the name pop surrealism. Lowbrow art often has a sense of humor – sometimes the humor is gleeful, sometimes impish, and sometimes it is a sarcastic comment.

Most lowbrow artworks are paintings, but there are also toys, digital art, and sculpture.

Some of the first artists to create what came to be known as lowbrow art were underground cartoonists like Robert Williams and Gary Panter. Early shows were in alternative galleries in New York and Los Angeles such as Psychedelic Solutions Gallery in Greenwich Village, New York City which was run by Jacaeber Kastor, La Luz de Jesus run by Billy Shire and 01 gallery in Hollywood, run by John Pochna. The movement steadily grew from its beginning, with hundreds of artists adopting this style. As the number of artists grew, so did the number of galleries showing Lowbrow; Most likely the first formal art gallery to take low brow art seriously was the Julie Rico Gallery in Santa Monica with the one-man show "Looney Virtues", in 1992 by artist Anthony Ausgang. The Bess Cutler Gallery also went on to show important artists and helped expand the kind of art that was classified as Lowbrow. The lowbrow magazine Juxtapoz by Robert Williams, first published in 1994, has been a mainstay of writing on lowbrow art and has helped direct and grow the movement.

Writers have noted that there are now distinctions to be drawn between how lowbrow manifests itself in different regions and places. Some see a distinct U.S. "west coast" lowbrow style, which is more heavily influenced by underground comix and hot rod car-culture than elsewhere. As the lowbrow style has spread around the world, it has been intermingled with the tendencies in the visual arts of those places in which it has established itself. As lowbrow develops, there may be a branching (as there was with previous art movements) into different strands and even whole new art movements.

In an article in the February 2006 issue of his magazine Juxtapoz, Robert Williams took credit for originating the term "lowbrow art." He stated that in 1979 Gilbert Shelton of the publisher Rip Off Press decided to produce a book featuring Willams' paintings. Williams said he decided to give the book the self-deprecating title The Lowbrow Art of Robt. Williams, since no authorized art institution would recognize his type of art. "Lowbrow" was thus used by Williams in opposition to "highbrow." He said the name then stuck, even though he feels it is inappropriate. Williams refers to the movement as "cartoon-tainted abstract surrealism ." Lately, Williams has begun referring to his own work as "Conceptual Realism."

Lowbrow is also commonly referred to as pop surrealism. The term "pop surrealism" was coined by The Aldrich Contemporary Art Museum for its 1998 exhibit of the same name. The exhibit featured work by over seventy artists, including Gregory Crewdson, Mariko Mori, Ashley Bickerton, Art Spiegelman, Tony Oursler, and Cindy Sherman, and was memorialized in the 1999 book of the same name. Reviewing the exhibition for ArtForum, Steven Henry Madoff wrote: "The mutant sensibility at work in this droll, smartly curated exhibition proposes the marriage of Surrealism's dream-laden fetish for the body eroticized and grotesque and Pop art's celebration of the shallower, corrosively bright world given over the packaged good." The New York Times said of the exhibit "at first, Surrealism and popular culture would seem to be oil and water. Surrealism mines dreams and the unconscious, while popular culture is concerned with surface and commonplaces. But in recent years they have been brought together in exhibitions concerned with proving that High and Low are related." Kirsten Anderson, who edited a second book called Pop Surrealism, considers lowbrow and pop surrealism to be related but distinct movements. However, Matt Dukes Jordan, author of Weirdo Deluxe, views the terms as interchangeable.