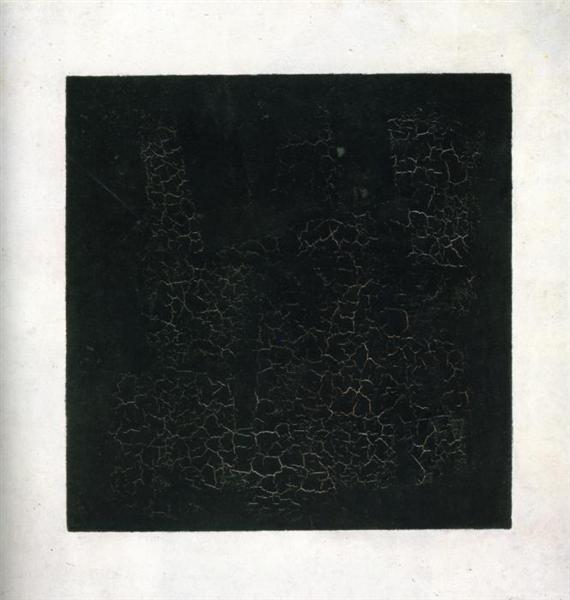 Black Square (also known as The Black Square or Malevich's Black Square) is an iconic painting by Kazimir Malevich. The first version was done in 1915. Malevich made four variants of which the last is thought to have been painted during the late 1920s or early 1930s. Black Square was first shown in The Last Futurist Exhibition 0.10 in 1915. The work is frequently invoked by critics, historians, curators, and artists as the "zero point of painting", referring to the painting's historical significance and paraphrasing Malevich.

Malevich painted his first Black Square in 1915. He made four variants of which the last is thought to have been painted during the late 1920s or early 1930s, despite the author's "1913" inscription on the reverse. The painting is commonly known as Black Square, The Black Square or as Malevich's Black Square. It was first shown in The Last Futurist Exhibition 0.10 in 1915.

Forensic detail reveals of how Black Square was painted over a more complex and colorful composition.

A plurality of art historians, curators, and critics refer to Black Square as one of the seminal works of modern art, and of abstract art in the Western painterly tradition generally.

Malevich declared the square a work of Suprematism, a movement which he proclaimed but which is associated almost exclusively with the work of Malevich and his apprentice Lissitzky today. The movement did have a handful of supporters amongst the Russian avant garde but it was dwarfed by its sibling constructivism whose manifesto harmonized better with the ideological sentiments of the revolutionary communist government during the early days of Soviet Union. Suprematism may be understood as a transitional phase in the evolution of Russian art, bridging the evolutionary gap between futurism and constructivism.

The larger and more universal leap forward represented by the painting, however, is the break between representational painting and abstract painting—a complex transition with which Black Square has become identified and for which it has become one of the key shorthands, touchstones or symbols.

The work is frequently invoked by critics, historians, curators, and artists as the "zero point of painting", referring to the painting's historical significance as a paraphrase of a number of comments Malevich made about The Black Square in letters to his colleagues and dealers.

Malevich had made some remarks about his painting.

Negligence and contempt on the part of the Soviet government in whose keeping the original Black Square remained for decades has resulted in the painting degrading considerably.

In 2015, while viewing the "Black Square" with a microscope, art historians at the State Tretyakov Gallery in Russia discovered a message underneath its black paint. It was believed to read as "Battle of negroes in a dark cave."

The reference was linked to a 1897 comic by French writer Alphonse Allais with the caption: “Combat de Nègres dans une cave pendant la nuit” or “Negroes Fighting in a Cellar at Night.” The researchers at the State Tretyakov Gallery speculated that Malevich was responding to the racist joke within Allais' popular work.