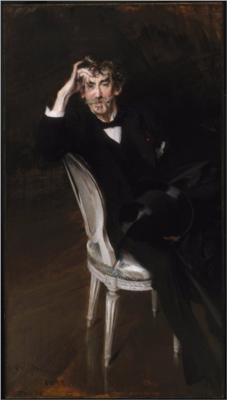 James Abbott McNeill Whistler (/ˈwɪslər/; July 10, 1834 – July 17, 1903) was an American artist, active during the American Gilded Age and based primarily in the United Kingdom. He was averse to sentimentality and moral allusion in painting, and was a leading proponent of the credo "art for art's sake". His famous signature for his paintings was in the shape of a stylized butterfly possessing a long stinger for a tail. The symbol was apt, for it combined both aspects of his personality—his art was characterized by a subtle delicacy, while his public persona was combative. Finding a parallel between painting and music, Whistler entitled many of his paintings "arrangements", "harmonies", and "nocturnes", emphasizing the primacy of tonal harmony. His most famous painting is Arrangement in Grey and Black No. 1 (1871), commonly known as Whistler's Mother, the revered and oft-parodied portrait of motherhood. Whistler influenced the art world and the broader culture of his time with his artistic theories and his friendships with leading artists and writers.

James Abbott Whistler was born in Lowell, Massachusetts, on July 10, 1834, the first child of Anna Matilda McNeill and George Washington Whistler, and the brother of Confederate surgeon Dr. William McNeill Whistler. His father was a railroad engineer, and Anna was his second wife. James lived the first three years of his life in a modest house at 243 Worthen Street in Lowell. Today, the house is a museum dedicated to Whistler. During the Ruskin trial (see below), Whistler claimed St. Petersburg, Russia, as his birthplace, declaring, "I shall be born when and where I want, and I do not choose to be born in Lowell."

In 1837, the Whistlers moved from Lowell to Stonington, Connecticut, where George Whistler worked for the Stonington Railroad. Sadly, during this period, three of George and Anna Whistlers' children died in infancy.

In 1839, the Whistlers' fortunes improved considerably when George Whistler received the appointment that would make his fortune and fame - that of chief engineer for the Boston & Albany Railroad. Thus, the family moved to Springfield, Massachusetts, then one of the United States' most prosperous cities, where they constructed a mansion in a posh district. (The Whistler Mansion, as it came to be known, stood at the corner of Chestnut and Edwards Streets in Springfield, where currently the Wood Museum of History stands.) The Whistlers lived in Springfield until they left the United States in late 1842.

Nicholas I of Russia learned of George Whistler's ingenuity in engineering the Boston & Albany Railroad, and offered Whistler a position in 1842 engineering a railroad from St. Petersburg to Moscow. In the winter of 1842, the Whistlers moved from Springfield to St. Petersburg.

In later years, James Whistler played up his mother's connection to the American South and its roots, and presented himself as an impoverished Southern aristocrat (although it remains unclear to what extent he truly sympathized with the Southern cause during the American Civil War). After her death, he adopted her maiden name, using it as an additional middle name. Young Whistler was a moody child prone to fits of temper and insolence, who—after bouts of ill-health—often drifted into periods of laziness. His parents discovered in his early youth that drawing often settled him down and helped focus his attention.