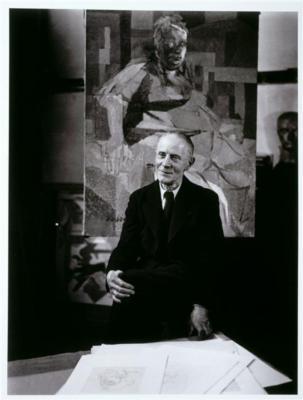 Born Emile Méry Frédéric Gaston Duchamp in Damville, Eure, in Normandy, France, he came from a prosperous and artistically inclined family. While he was a young man, his maternal grandfather Emile Nicolle, successful businessman and artist, taught him and his siblings.

Gaston Duchamp was the elder brother of:

In 1894, he and his brother Raymond moved to Montmartre in Paris. There, he studied law at the University of Paris, but received his father's permission to study art on the condition that he must continue studying law.

At first, he was influenced by Edgar Degas and Henri de Toulouse-Lautrec, but later he participated in the fauvist, Cubist, and abstract impressionist movements.

By 1906, Montmartre was a bustling community and Jacques Villon moved to Puteaux in the quiet outskirts of Paris. There, he began to devote more of his time to working in drypoint, an intaglio technique that creates dark, velvety lines that stand out against the white of the paper. During this time he worked closely to develop his technique with other important printmakers such as Manuel Robbe.

His isolation from the vibrant art community in Montmartre, together with his modest nature, ensured that he and his artwork remained obscure for a number of years.

At his home, in 1911, he and his brothers Raymond and Marcel organized a regular discussion group with artists and critics such as Jean Metzinger, Albert Gleizes, Francis Picabia, Robert Delaunay, Fernand Léger and others that was soon dubbed the Puteaux Group (or the Section d'Or). Villon was instrumental in having the group exhibit under the name Section d'Or after the golden section of classical mathematics. Their first show, Salon de la Section d'Or, held at the Galerie La Boétie in October 1912, involved more than 200 works by 31 artists.

In 1913, Villon created seven large drypoints in which forms break into shaded pyramidal planes. That year, he exhibited at the Armory Show in New York City, helping introduce European modern art to the United States. His works proved popular and all his art sold. From there, his reputation expanded so that by the 1930s he was better known in the United States than in Europe.

Among Villon's greatest achievements as a printmaker was his creation of a purely graphic language for cubism – an accomplishment that no other printmaker, including his fellow cubists Pablo Picasso or Georges Braque, could claim.