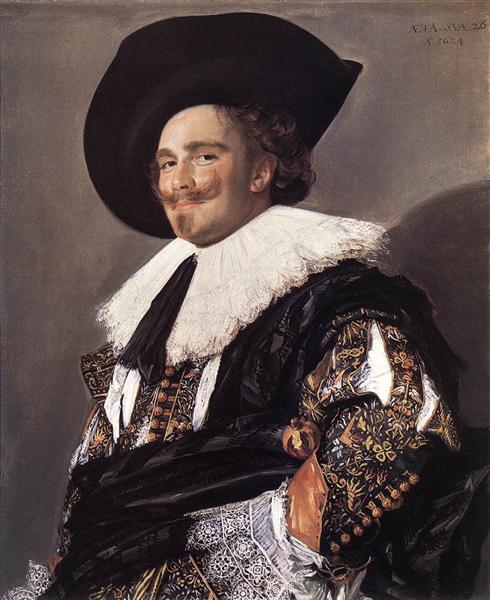 The Laughing Cavalier stands out among Hals’s works of male portraiture, because of the vibrant coloring and exuberant costume. The treatment and details of the painting indicate that this was a commissioned portrait for a man of high stature. Hals demonstrates his virtuosity and skill through the exquisite execution of the textures and garment details, painting the beautiful gold and silver threaded embroidery and delicate lace layers in the collar and the cuffs.

Even though the identity of the sitter is not firmly established, the painting offers helpful clues. The portrait features an inscription, which states that the subject is 26 years old, confirming that he was born in 1597 or 1598. It is also likely that he resided in Haarlem, as Hals almost exclusively portrayed citizens of Haarlem. The embroidery has motifs of arrows, oil lamps encircled by bees, that symbolize the pains and pleasures of love: the arrows pierce the heart, and the bees signify how the lovesick are drawn to the flame of love. These indicate that the man was an unmarried gentleman. The staff of mercury, another motif of embroidery, alludes to trade activities as a possible sitter’s occupation.
In recent years, the art historian Pieter Biesboer presented substantial evidence that the man in the portrait is Tieleman Roosterman, a wealthy Haarlem merchant. The identity of the sitter was narrowed through the year of birth and the assumption that he resided in Haarlem.

When examining Hals’s works of commissioned portraiture, stylistic differences are depending on the social identity and occupation of the subject. For example, when depicting Haarlem’s ruling class, in portraits such as Portrait of Jacob Pietersz Olycan (1625) and Nicolaes Woutersz van der Meer (1631), the appearance is relatively subdued. The portraits reflect their status as political leaders - their poses are static and dignified, while their costumes are simple and black. In contrast, Hals’s portrayals of the Haarlem elite were executed in a more casual and dashing style, as in Willem van Heythuyzen (1625) and Portrait of Isaak Abrahamsz Massa (1626). Expressly, Hals reserved this style for a clientele of wealthy Flemish merchants, who immigrated to Haarlem after the fall of Antwerp. The Laughing Cavalier was conceived in the same kind of style, and correspondingly Tieleman Roosterman was of a similar background and status. Most importantly, Hals painted another portrait of Roosterman 10 years after The Laughing Cavalier, in Portrait of Tieleman Roosterman (1634). Even though the men in the paintings are 10 years apart, a physical resemblance exists. The overall facial features are similar, as well as the hair and the eye color.

Interestingly, there is a small detail that can be found in both paintings, a minute scar that parts the eyebrow hair in the left eyebrow. The embroidered motifs in The Laughing Cavalier also reinforce the possibility that Roosterman is the sitter. Roosterman was indeed a bachelor at the time and a merchant by trade. Furthermore, the Roosterman’s family coat of arms has arrows on its crest and a figure that holds an arrow, making another connection between Roosterman and the decorated costume in The Laughing Cavalier.

The Laughing Cavalier (1624) is a portrait by the Dutch Golden Age painter Frans Hals in the Wallace Collection in London, which has been described as "one of the most brilliant of all Baroque portraits". The title is an invention of the Victorian public and press, dating from its exhibition in the opening display at the Bethnal Green Museum in 1872–75, just after its arrival in England, after which it was regularly reproduced as a print, and became among of the best known old master paintings in Britain. The unknown subject is in fact not laughing, but can be said to have an enigmatic smile, much amplified by his upturned moustache.

The portrait measures 83 × 67.3 cm (32.7 × 26.5 in) and is inscribed at top right "Æ'TA SVÆ 26/A°1624", which expands to "aetatis suae 26, anno 1624" in Latin and means that the portrait was painted when the sitter was 26 and in the year 1624. The identity of the man is unknown, and though the recorded 19th century titles in Dutch, English and French mostly suggest a military man, or at least an officer in one of the part-time militia companies that were often the subjects of group portraits, including some by Hals and later Rembrandt's Night Watch (1642), in fact he was as likely to be a wealthy civilian. Art historian Pieter Biesboer has theorised the painting possibly depicts Dutch cloth merchant Tieleman Roosterman, the subject of another of Hals' portraits.

The composition is lively and spontaneous, and despite the apparent labour involved in the gorgeous, and very expensive, silk costume, close inspection reveals long, quick brush strokes. The turning pose and low viewpoint are found in other portraits by Hals and here allow emphasis on the embroidered sleeve and lace cuff. There are many emblems in the embroidery: signifying "the pleasures and pains of love" are "bees, arrows, flaming cornucopiae, lovers' knots and tongues of fire", while an obelisk or pyramid signifies strength and Mercury's cap and caduceus fortune.

In general, commissioned portraits such as this rarely showed adults smiling until the late 18th century, though smiling is often seen in tronies and figures in genre painting. But Hals is an exception to the general rule and often showed sitters with broader smiles than here, and in informal poses that bring an impression of movement and spontaneity to his work.

The effect of the eyes appearing to follow the viewer from every angle is a result of the subject being depicted as looking directly forward, toward the artist's point of view, combined with being a static two dimensional representation of this from whichever angle the painting itself is viewed.

The painting's provenance only goes back to a sale in The Hague in 1770; after further Dutch sales it was bought by the Franco-Swiss banker and collector the Comte de Pourtalès-Gorgier in 1822. After his death the painting was acquired at the auction of his collection in Paris in 1865 by Richard Seymour-Conway, 4th Marquess of Hertford, who outbid Baron James de Rothschild at more than six times the sales estimate. It was in Hertford's Paris home in 1871, listed as portrait d'un homme ("portrait of a man"), and then brought to London, probably for the purpose of exhibiting it in a large and long loan exhibition of old master paintings at Bethnal Green, which was deliberately sited away from the West End of London to attract the working classes. The exhibition was a huge success and A Cavalier (the catalogue title) a particular hit with both public and the critics; it played a considerable part in raising the critical estimation of Hals in England. By 1888, when it was again exhibited at the Royal Academy, it had become Laughing Cavalier, though a cleaning in the intervening period (in 1884) may have changed the effect. The critic in the Athenaeum noted a brighter appearance, but also that "The man smiles rather than laughs". Hertford's collection was bequeathed to his natural son Sir Richard Wallace Bt., whose widow donated it and his London house to the nation as the Wallace Collection.