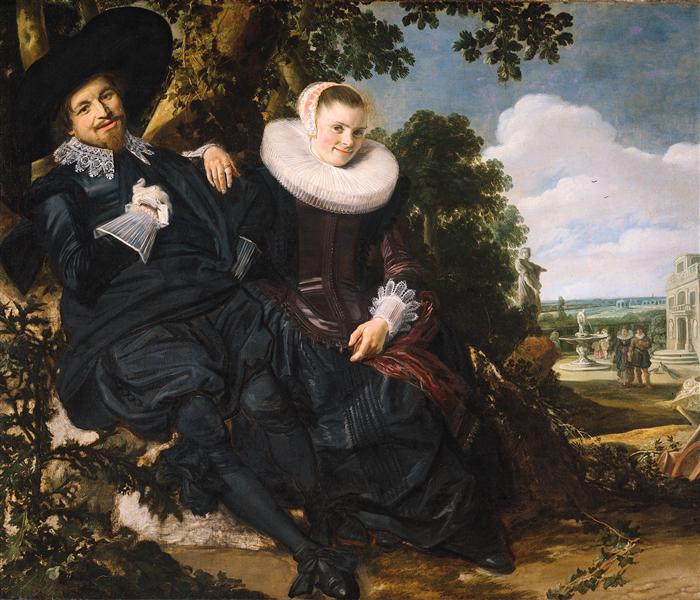 The painting shows a happy couple sitting against a tree "picnic-style", with a garden scene in the distance. They smile at the viewer and look more relaxed than amorous.

In his 1910 catalog of Frans Hals works Hofstede de Groot wrote: "427. A MARRIED COUPLE. B. 15; M. 90. In a garden a gentleman sits in the left foreground smiling at the spectator. His right hand is at his breast; his left hand is pressed to his side. He has a moustache and a small pointed beard. He wears a broad-brimmed black felt hat, a black silk costume with a lace collar and fine linen wristbands. Beside him to the right sits a woman, bending slightly forward, with her head turned three-quarters left. She smiles rather slyly at the spectator. Her right hand rests on the man's left shoulder; her left hand is in her lap. She wears a black dress under a dark-purple gown, a ruff, a white cap threaded with a pink ribbon, and lace-trimmed wristbands. Behind the couple are trees. To the right is a park with merry-making couples, a building, a fountain, and a statue. It was wrongly supposed to represent Frans Hals and his wife. Canvas, 58 inches by 67 1/2 inches. Sales. J. Six, Amsterdam, April 6, 1702 (bought in). H. Six van Hillegom, Amsterdam, November 25, 1851, No. 15. In the Rijksmuseum, Amsterdam, 1907 catalogue, No. 1084."