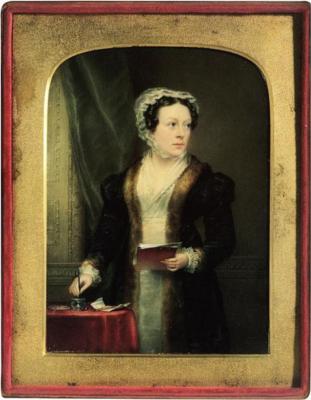 Christina Robertson RSA or Christina Saunders (17 December 1796 – 30 April 1854) was a Scottish artist who became a Russian court painter. She was the first woman honorary member of the Royal Scottish Academy.

Saunders was born in Kinghorn in Fife in 1796. She is thought to have been both trained by her uncle, George Sa(u)nders and launched into her career based at his house in London. Sanders was a successful portrait painter and she rapidly established a flow of commissions initially from Scottish patrons for her miniatures but later for oil and watercolour paintings. By 1823 she was married to James Robertson and exhibiting at the Royal Academy and by 1828 she had her own studio. The following year she became the first honorary woman member of the Royal Scottish Academy.

During the 1830s she was travelling away from her artist husband and her own children. She worked in Paris in the mid 1830s and she was tempted to St Petersburg. There would have been more commissions than normal to replace the paintings lost in the fire that destroyed the Winter Palace in 1837. Robertson was in St Petersburg from 1839 to 1841 where she carried out full length painting of Empress Alexandra and her three daughters - Maria, Olga and Alexandra. In 1841 she was made an honorary member of the Imperial Academy of Arts.

Some of her portraits were engraved by 1833 and they were included in "The portrait gallery of distinguished females including beauties of the courts of George IV and William IV with memoirs by John Burke.

Roberstson left dozens of paintings that are important if only because they record the portraits of historic figures. She is thought to be less well known that she might be as of the deterioration of the relationship between the British and Russian empires.