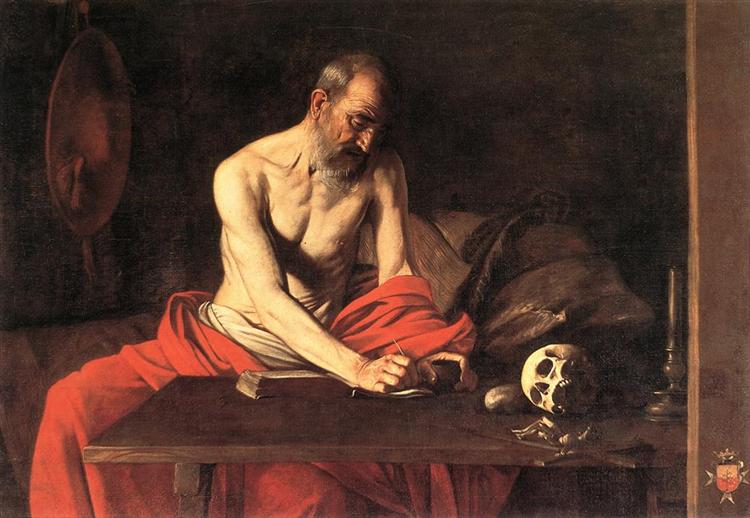 Saint Jerome Writing is a painting by the Italian master Michelangelo Merisi da Caravaggio in 1607 or 1608, housed in the Oratory of St John's Co-Cathedral, Valletta, Malta. It can be compared with Caravaggio's earlier version of the same subject in the Borghese Gallery in Rome.

Caravaggio arrived in Malta on 12 July 1607. He had spent the previous months in Naples, where he had sought refuge with his powerful protectors the Colonna family after killing a man in a brawl in Rome the previous year. In Naples he had been an instant success, achieving ten commissions, including a number or large and very prestigious altarpieces, in less than a year, and inspiring a following of Caravaggisti among the city's artists. In short, in Naples he had found professional success, the esteem of fellow-artists, and the support of important patrons. Why then leave all this for a speck of rock inhabited by warrior-monks noted more for their fighting (Peter Robb compares them to the French Foreign Legion) than for their support of the arts? The following summarises the speculation of recent biographers such as Robb and Helen Langdon: In 1607 Caravaggio was still an outlaw, at risk of being tracked down by his enemies - the family of the man he had killed - and Naples, close to Rome, may have seemed comparatively exposed. His patrons and protectors - the Colonna, the Giustiniani, the banker Ottavio Costa, - had strong links with Malta and the Knights, and it may have been felt that joining the Order would give Carvaggio immediate protection and aid in procuring a Papal pardon for his eventual return to Rome. The Grand Master of the Knights, Alof de Wignacourt, was keen to enhance the prestige of his Order and his capital, and the prospect of having one of the leading artists in Rome and Naples as de facto court painter must have been an appealing one. And so Caravaggio went to Malta.

The coat of arms in the bottom right corner of the painting is that of Ippolito Malaspina, Prior of the Order of the Knights of Saint John (the Knights of Malta) in Naples. Malaspina was a relative by marriage of Caravaggio's patron Ottavio Costa, a friend of his other patrons the Giustiniani brothers, and a cousin of Giovanni Andrea Doria, Prince of Genoa, who two years before had sheltered the artist after an earlier flight from Rome. It's possible that he may have had himself represented as the saint. Saint Jerome was thus a very important painting for the artist.

The subject seems oddly unmartial for a commission by a man whose raison d'etre was to fight the Turks - St Jerome was venerated as the translator of the Bible, which he is seen doing here. But Malaspina was not only a famous warrior, he was also a commissioner for the poor, orphans and widows, and the painting may have been intended to emphasise both this aspect of his work and also the asceticism of the Order.