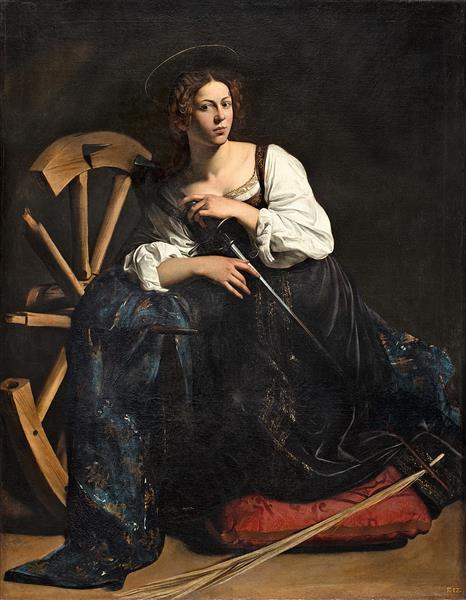 Saint Catherine of Alexandria (c. 1598) is an oil painting by the Italian Baroque master Caravaggio. It is part of the Thyssen-Bornemisza Collection of Madrid.

Saint Catherine of Alexandria was a popular figure in Catholic iconography. She was of noble origins, and dedicated herself as a Christian after having a vision. At the age of 18 she confronted the Roman Emperor Maximus (presumably this refers to Galerius Maximianus), debated his pagan philosophers, and succeeded in converting many of them to Christianity. Imprisoned by the emperor, she converted his empress and the leader of his armies. Maximus executed her converts (including the empress) and ordered that Catherine herself be put to death on a spiked wheel. The wheel reportedly shattered the moment Catherine touched it. Maximus then had her beheaded. She became patron saint of libraries and librarians, as well as teachers, archivists, and all those associated with wisdom and teaching, and all those whose livelihoods depended upon wheels. The year of her martyrdom was traditionally held to have been 305, (the year of a major persecution of Christians under Galerius), and her feastday was celebrated on 25 November. In 1969 the Church, persuaded by the overwhelming opinion of historians that Catherine had probably never existed, removed her from the calendar of saints; by 2002, while the majority of historians had not changed their minds, the Church had, and she was reinstated. Her qualities are supposed to be those of beauty, fearlessness, virginity, and intelligence.